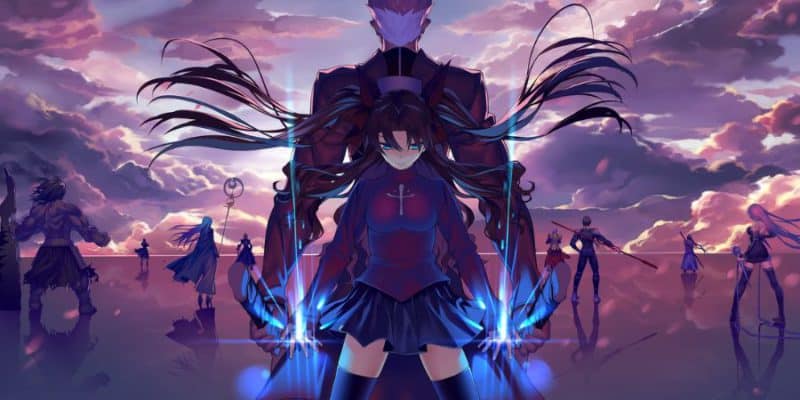 Originally a novel, the Fate franchise has developed it into mediums such as light novels, anime, and even film. With such a vast franchise, many people are confused about what order to watch Fate anime.

With such varying adaptations over the years, it can be quite strenuous for a newbie to figure out what order to watch Fate anime in to get the most out of it.

There have been many entries in the franchise since 2006, and the timelines for each vary from the chronological Fate anime watch order.

So, if you are looking forward to watching the Fate anime series, then look no further as today, we will tell you what order to watch Fate anime. But before we get into that, let’s learn a little bit about the series itself.

The Fate anime series is based on a series of visual novels of the same name. This franchise is known best for its adaptation of Stay Night. It was developed by Kinoko Nasu, co-founder of the Type-Moon studios. The first game was released in 2004 as an adult game.

That game was later adapted into an anime. Fate/stay night anime was released on January 7, 2006.

Fate/stay night follows the story of Shirou, Emiya, a high schooler who unwittingly finds himself tangled in the fifth magical battle royale known as the Holy Grail War.

This war is fought between superpowered servants and seven pairs of masters.

Fate is very popular due to the diverse genres combined, from urban fantasy to historical. Moreover, it has a thought-provoking and enchanting storyline depicted over three arcs that all start from a mutual point and eventually fall into the same story.

People who aren’t familiar with the series can find the storyline extremely complicated. Therefore we are going to talk about Fate anime watch order.

What Order To Watch Fate Anime?

If you are new to the series, there are two Fate anime watch orders, one of them is the sequence it was released, and the second is the chronological order. We will discuss both watch orders in extreme detail.

Although it is not recommended to watch the series in this order for newbies since the events can get mixed up, however, if you’re rewatching the series, it won’t be a problem.

Like any extended franchise, the best Fate anime watch order is chronological order, so you can see the events that happen according to the timeline they are set in. Watching the series in this order would help you avoid any unnecessary complications.

As the name might suggest, Fate/Zero comes first in the chronological Fate anime watch. Though many fans may argue against starting here, for a newcomer, it is the best way to get accustomed to the new world you’re entering.

Fate/Zero’s story is set ten years before the events of Fate/stay night, which was released in 2006. It introduces the fourth Holy Grail War, taking on a much deeper approach than the rest of the series. This sets the tone for an epic journey and serves as a good basis.

This entry in the franchise is extremely popular and well-made. It is constantly mentioned when discussing the Fate series watch order or the entire franchise overall. The series is also the best and most liked adaptation according to many viewers.

It has a well-thought-out and detailed storyline. Moreover, the gradual character development adds a lot to your overall experience. The incredible OST undoubtedly makes it one of the most remarkable and fascinating anime series.

Aside from this, Fate/Zero has stellar animation and explores the theme of ambition and sacrifice, earning the praise of critics and viewers.

Lord El-Melloi II’s Case Files is a canon sub-series of the Fate/stay timeline that takes place ten years after Fate/Zero and two months before Fate/stay night.

You can squeeze this series into your Fate anime watch order either after Fate/Zero or watch it separately after completing the main timeline. However, chronologically it takes place between the events of Fate/stay night and Fate/Zero.

Fate/stay night and Fate/Zero are quite interchangeable in the fate series watch order, and you may choose whichever one you want to go with as there are benefits to both, and it will still be worthwhile.

Fate/Stay Night was released earlier in 2006 as the first anime adaption and was produced by the Deen Studio. It has beautiful visuals with a concrete storyline.

It revolves around Saber, a servant as the female protagonist, and lays out the concepts of the Holy Grail War and the World. Even though it mixes in certain bits from other routes, it is mainly an adaptation of the route Fate from the first novel.

So, this series can be swapped with Fate/Zero in the watch order since they both lay the foundation for a newbie.

Overall, the character development, writing, and pace at which the story unfolds are pretty good throughout the show. However, some may argue that Fate/Zero is better than Fate/night stay, but this doesn’t mean that Fate/night stay is unwatchable.

Fate/stay night: Unlimited Blade Works is adapted into film and anime, depicting the same story in entirely different timeframes. If you want to go over the basics of the Fate world, then the film is the right option for you, and you can get it done within two hours.

However, if you want to immerse yourself in the Fate world as much as possible, then consider watching the Unlimited Blade Works series. It takes the second route of the original novel while maintaining the same plot as Fate/stay night.

However, this adaptation flows around Rin Tohsaka and Archer, her servant. We recommend you watch the series instead of the film due to its improved animation style and fighting sequences.

It also gives a more detailed insight into the story. On the other hand, the film may feel a little too rushed for squeezing the entire story into two hours. You can also watch them both to get the full experience. This entry is what confuses people the most when they’re researching what order to watch Fate anime.

This trilogy consists of the following movies:

It has a much darker tone than that of Fate/stay night or Unlimited Blade Works. This trilogy’s story follows Shirou Emiya as he begins his inquiry into the previous Holy Grail War and its terrible past. His childhood friend, Sakura, has a mysterious past connected to it. As his investigation continues, more dark truths are revealed.

This entire trilogy is loaded with suspense and emotions. You will be always on the edge of your seat. Moreover, the storyline is just incredible.

Heaven’s Feel marks the end of the third final route of the original Fate series.

After finishing the Fate/stay night: Heaven’s Fee trilogy, you can move towards the various spin-offs that are part of the Fate anime universe. Let’s look at these spin-offs and their watch orders.

However, if you’re a Fate anime fan and want to see some more content, then Fate/kaleid liner Prisma Illya is the perfect one for you. This entire series consists of three shows and two movies. These entries are:

The storyline throughout this series follows the events that take place in a parallel universe before the start of the First Holy Grail War. In the series, the story begins when Illyaviel is chosen as the new master by a magical wand named Ruby, but the former owner refuses to give it up without a battle.

Fate/Grand Order is the next series you should watch in terms of Fate anime watch order.

This adaptation primarily aims to promote the game. It almost lacks everything that earned the previously discussed series such a prestigious reputation. In simpler words, if you decide to skip this series, you won’t be missing much.

The story of Fate/Grand Order takes place in a different timeline. The First Holy Grail War does not take place in this timeline. Eventually, other movies expanded this alternate timeline, which include:

Fate/Apocrypha consists of 25 episodes revolving around the events that occurred years after the third Holy Grail War.

This series is set in an alternate timeline, unlike the previous series. However, it is interesting and much better than some other spin-offs. The sets of servants have their own ideologies, personalities, aspirations, and abilities.

Similarly, this series gives the viewers a deeper insight into the characters’ relationships at the time, as opposed to the previous Grand Order series, which was bloated with fan service.

The last encore is an adaptation of a manga with the same name, comprising six volumes with forty-one chapters. Once again, it takes on a completely different timeline with a futuristic take.

It revolves around an artificial world created with the sole purpose of the Holy Grail War. Hakuno Kishinami is the male protagonist, the main hero, and he summons Saber, his servant.

He wakes up in a peculiar world with no memories of his past. He fights for survival and discovers the secret of this mysterious world.

Fate/EXTRA Last Encore incorporated many Isekai elements into the franchise. This is something new for Fate fans, and they might enjoy it.

Fate/Prototype’s plot unfolds in its own timeline, eight years after the devastating First Holy Grail War, popularly known as the “Heaven’s Feel” ritual.

It is an OVA and doesn’t have much significance to the overall Fate timeline.

Where Can I Watch Fate Anime?

After learning what order to watch Fate anime, you must be wondering where you can stream all these series. Well, fortunately, most of them are available on Netflix.

If any series is unavailable in your region, you can always change it to get more options on Netflix and enjoy your favorite Fate anime in its watch order easily.

You can check our guide on how to change the Netflix region.

Moreover, you can also watch it on Hulu or Crunchyroll if you want all the series in a single place.

How Long Is Fate Anime?

It takes about 9 and a half hours to watch Fate/Stay Night alone, and it will take even longer to complete the series, even if we follow the Fate series watch order.

However, this gives you an idea of how long you can binge through the series and the breaks you will require or not. You might be looking at 100+ hours’ worth of content.

According to an official tweet by Comptiq on April 5, 2022, a brand-new series will be developed in the franchise as a novel.

It will be written by Hikaru Sakurai, an ex-director and scenarist at Liar Soft. Her prominent works include Gahkthun of the Golden Lightning and Fate/Extella.

A key Visual has been revealed that introduces a new character with blue eyes, white hair, and seemingly horns.

The fans believe that the character will be related to Brynhildr. It has also been confirmed that there will be new heroic spirits and servants alongside a new setting.

With that said, this concludes our guide on what order to watch Fate anime. We have made sure to discuss everything with the utmost detail regarding the Fate anime watch order, and you won’t have any confusion regarding it.

What happened to Rick Grimes? This is the most exciting question of the ...