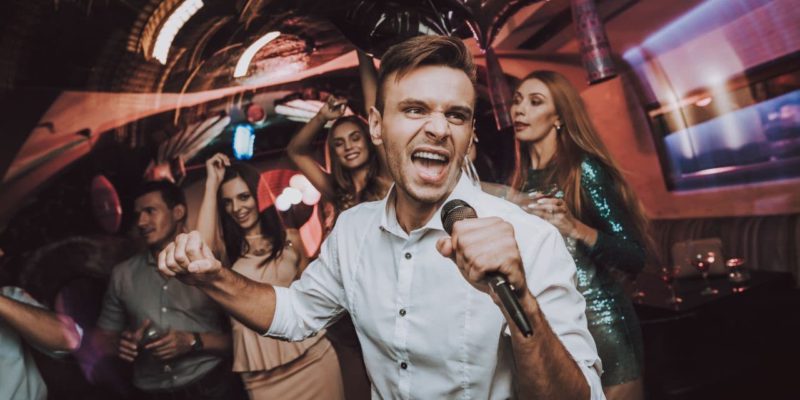 Seeking the best karaoke songs? Karaoke moments are probably the most enjoyable part of any sort of party or gathering. But we often get confused choosing one special song among a lot of other favorites. To help you with that, here we have categorized the best songs for karaoke. So, next time you know what to pick for a perfect show and enjoy your own performance with the audience.

“Señorita” is probably one of the best songs they have ever produced. A perfect romantic duet song for karaoke.

2. John Travolta & Olivia Newton John – You’re The One That I Want

If you are looking for a fast-pacing song in the form of duet vocals then this one can be taken seriously. The song was released in 2002. The song has an upbeat and cheerful vibe. Should cheer up the audience a lot.

3. Lady Gaga & Bradley Cooper – Shallow (From A Star Is Born)

“Shallow” starts slow with a soft guitar tune and soon builds up into a stronger duet song. Sing your heart out to blow your karaoke performance with magic.

Do you like Disney? If yes, then this one should be familiar to you. This Disney movie song is one of their best male & female duos.

Looking for something slow and romantic? “Endless Love” may be from the 80s but surely it will remain one of the best romantic karaoke duos of all time.

The song features a dark side of love. About how it feels at a distance from your partner. A very popular song and an awesome choice for a duo.

When two legendary singers come together, magic happens. This song was originally sung by two male vocals so you can do the same in your karaoke performance.

Wanna try something different? This song should make a bold appearance. Perfect for a female duo.

“Rain on me” was released in 2020. The two bold female vocalists gave voice to the song. You may also follow them and do a female duo.

Here are the karaoke songs that you might want your audience to sing with you. It will work perfectly for a group performance. Feels great when you sing with a bunch of friends.

10. Micheal Jackson – They Don’t Care About Us

This 90’s will always be in the hearts of music lovers. It feels like the song was created for a group performance.

“Hey Jude” is quite an inspirational song. Should work out perfectly for a group karaoke performance.

Hey Girls! This one’s for you if you wanna perform as a group. The song has a fast and cheerful beat. Try it out!

This one is for the bad boys out there! Try doing some cheerful steps like the music video when performing as a group and you will rock it.

14. Backstreet Boys – I Want It That Way

You may try shifting between vocals when singing “I want it that way”. A classy choice for a group karaoke song.

A very unique choice for a karaoke group song. I won’t say it’s an easy one, but surely a good one for a group performance. Try it out.

We know that you love rock n roll. Let’s do it like Joan Jetts’ with your group.

Everyone loves this song in particular. Trust me, if you and your group start singing this one, every single person around will join you.

Classics have always been at the top of the choice of people in general. Here are the best classic karaoke songs.

Hold on to that feeling

It’s one of the best classic karaoke song choices mentioned here. The song was released in 1981 on the album “Escape”.

Another 80’s release that you may put in the list of your classic choice.

“Hit the road jack” is quite a cheerful song that can also be performed as a duo.

“Love Story” is one of the best love songs of Taylor Swift. A perfect heart-touching song for a karaoke performance.

22. Taylor Swift – Back To December

This pop-country song is a great classic choice for a strong female vocalist. Originally released a decade ago but still sounds new.

Old is gold. Whoever said, said well. “Yesterday” was released in 1965 on the album “Help!” and it’s one of the oldest songs on this list.

25. Gloria Gaynor – I Will Survive

Doesn’t matter if he left you, you know you will survive. You can do it without him. This song proves that you are strong enough to deal with it and overcome it. “I will survive”

26. Shania Twain – That Don’t Impress Me Much

With this song you are basically saying that those generally impressive things don’t really impress you. Can be an interesting choice.

“I did it my way” that’s the best thing right? The independence and courage of doing things in your own way.

This 4.10-minute song was released in 1986, not a bad choice as a throwback classic karaoke song.

A song by the American rock band Toto that was released in 1982.

30. Elton John – Can You Feel the Love Tonight

The song was used in the famous animated movie Lion King. Are you a fan of Lion King? Maybe or maybe not. But this is a pure karaoke classic choice.

Do you like Hip Hop and R&b? Then this list is especially for you. Below are the best hip-hop and R&B karaoke songs.

It’s a single composition released in 1997 by the American rapper Notorious B.I.G.

This 2009 released hip-hop song was at the top of the European charts, taken from the album The E.N.D.

The debut song of Ginuwine was released in 1996 on the album, “The Bachelor”.

This hip-hop duo was released in September 2015. If you are tired of regulars and classics, this badass rap is for you.

No Diggity won a Grammy Award for Best R&B performance as a duo or group in 1998.

Elliot is the first female rapper who was nominated for the SongWriter Hall of Fame in 2019. “Work it” is not a song for innocent kids.

“Get Lucky” is one of the most popular songs from the R&B genre. This 6.07-minute song was released in 2013 in the album “Random Access Memories”

Contemporary songs are the songs that people can relate to most, especially teenagers and regular listeners.

The American rock band “No doubt” nailed it at “don’t speak”. This 90’s hit is basically a love song you would love to sing at karaoke nights.

This 2.53 minute song belongs to the pop genre. The song peaked at number four on Spotify in 2019.

Talking to the moon is basically a sad song by the American singer and songwriter Bruno Mars. If you haven’t listened to this one yet, then you must. It should be a perfect mood-maker.

Though Adele is not the first person to voice or cover this song, Adele’s version is especially recommended here.

“Give your all to me

and I’ll give my all to you”

“All of me” is probably the best contemporary karaoke song on this list. The soft piano music of this song was admired worldwide.

A good selection of songs can make your Karaoke night the most memorable one. Consider the kind of gathering you are singing with when choosing a song. You don’t have to be an expert at singing for a karaoke performance. A few mistakes are acceptable. However, you have to sing from your heart.

That concludes our list of best karaoke songs in English. We tried to mention various genres. Hope you found your choice of songs and some new songs to add to your playlist.

Homelander vs Superman: Who Would Win?

Korean popular music has swept the globe. In this article, there are several ...

Did you know that you can turn your Spotify plays into a receipt? ...

Having a water-damaged phone is a nightmare we have all experienced. We'll discuss ...