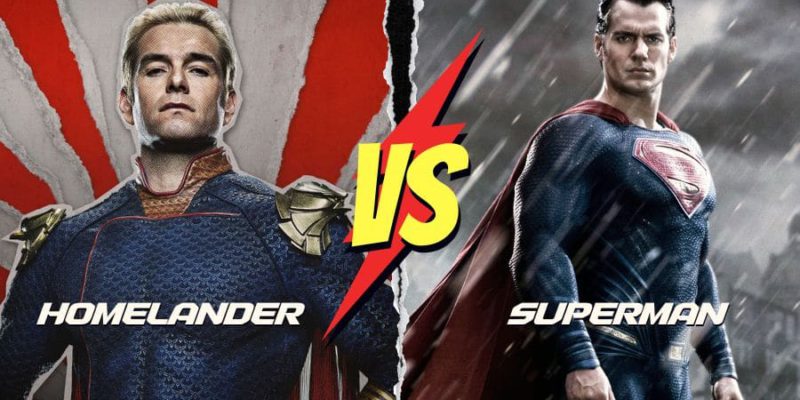 Superman is no doubt one of the strongest superheroes. He is occasionally compared to other extremely powerful superheroes or characters. One such character is Homelander. Many people wonder who would win in a Homelander vs Superman fight.

Homelander and Superman are both extremely similar in terms of their superpowers. Their costumes are also somewhat similar, so it is easy to see why fans would pit Superman against Homelander to see who’s the winner.

So today, we will take a look at all the facts about these two superheroes to determine who would win in a Homelander vs Superman situation. We will be going through their abilities, personalities, and fighting skills to determine the best between them.

Before we delve deeper, I would like to clarify that we will use both characters’ comic book versions. Doing so will give us a fixed template to compare the two characters.

We will first talk about Superman and Homelander individually and then compare the two in terms of various abilities. These comparisons will help us determine the winner of this Homelander vs Superman fight.

Superman is the last son of Krypton. He was created by DC Comics’ writers Joe Shuster and Jerry Siegel. Superman has been around since 1933 and is one of the oldest superheroes. Superman survived his dying planet because he was sent to Earth.

On Earth, he was adopted by the Kents, and they raised him as their own son. His childhood generated a lot of sympathy for humanity inside him. The first Superman incarnation is depicted as a being whose “physical structure was millions of years advanced.”

Clark Kent, AKA Superman, has been a symbol of morality and hope. He is extremely powerful but has enough patience and tolerance to pull his punches when dealing with normal humans. This is a defining feature of Superman’s personality.

Garth Ennis and Darick Robertson created Homelander. He first appeared in the popular comic book series, The Boys. Amazon Prime’s adaptation of The Boys made Homelander popular with his TV debut.

In both mediums, Homelander is portrayed as a selfish person. Homelander, like many of the other Supes handled by Vought, was subjected to Compound V tests before birth. Consequently, he possesses superhuman strength, heat and x-ray vision, a sonic scream, and the ability to fly.

Homelander is basically an “anti-Superman” character. Even though he starts out as a sane and moral character, he becomes more unhinged as his public opinion changes. He was created as a parody of Superman, after all.

It is quite easy to summarize the idea behind Homelander in a nutshell. He’s what everyone is scared Superman would turn into.

Superman and Homelander have really similar powers, but how they utilize them creates a huge difference between them. So let’s compare the powers in our Homelander vs Superman battle.

The most defining superpower of Homelander and Superman is their super strength. As we already know, Homelander’s super-strength is the result of an injection of Compound V.

Meanwhile, Superman’s super-strength stems from a superior gene structure. He isn’t human and came from a different planet. Superman’s source of power is the yellow-burning sun which is close to Earth.

Homelander is unequaled in The Boys’ universe, which means he’s never had to show off what he’s capable of. The only person who was strong enough to fight Homelander was a clone of him, AKA Black Noir, and he managed to kill Homelander off.

On the other hand, Superman has fought countless foes, some even stronger than him, and he has managed to come to the top most of the time. Superman has showcased his strength on countless occasions, and it is clear to see that in terms of strength, he would take the edge in this category.

Another big part of Homelander’s and Superman’s persona is their ability to fly. Flight is quite common among superheroes, but it was helped popularized by Superman. Homelander’s flight comes from the effects of Compound V.

However, Superman’s flight ability comes as a result of his different body structure. Krypton had a much stronger gravitational pull as compared to Earth. Since Clark’s body can endure such gravity, he can easily fly on Earth.

The flight will be an important factor in a Homelander vs Superman fight. The flying abilities of both characters are pretty similar.

There is no clear differentiation between them. Keep in mind that we are only talking about the flight ability, not the speed at which these characters fly. So it is safe to say that there is a clear tie between the two characters regarding flying.

Homelander can lift himself off the ground and fly away at amazing speeds. Homelander can travel huge distances in a matter of seconds while flying in the air. Superman can launch himself into the sky at lightning speed and fly farther than anybody else.

Sure, Homelander is able to dodge bullets and attacks thanks to his super speed and reflexes, but Superman can go one step further. Superman can go to the moon and back to Metropolis with no one realizing Clark Kent is absent.

So Superman is miles ahead when it comes to speed. He’ll easily beat Homelander if there is a Homelander vs Superman race.

Both Homelander and Superman share several abilities. Their differences are more about their attitudes, which also apply to their combat styles.

Superman is shown to restrain himself due to his respect for humanity and an optimistic attitude. He pulls his punches even when he’s angry at someone. He almost always defeats his opponent by utilizing his physical power and various other skills.

Homeland doesn’t comply with any of the rules that Superman follows. He can be as ruthless as he wants and will go to any extent to win a fight. He can break people’s skulls or blast them away, and he’s ready to do either if it means he’ll get what he wants.

This attitude is a major differentiator between both characters. So in a Homelander vs Superman situation, Homelander will get an advantage thanks to his remorseless attitude. He would go to any length to bring down Superman.

Homelander would continually try to probe the Man of Steel for a physical or psychological vulnerability, whether it was landing a cheap strike or harming any innocents in the proximity.

In a Homelander vs Superman fight, both characters would try to blast each other away with the help of their heat vision. Heat vision is one of the most dangerous weapons in their arsenals.

Superman uses heat vision a lot, but it seldom hurts people. In simpler words, Superman doesn’t use his heat vision if it can potentially kill the opponent. However, Homelander is much more comfortable using heat vision.

He understands how to murder when he needs to, and his heat vision is an extraordinarily powerful tool for doing so. In the show and the comics, Homelander has killed hundreds of people at once with his heat vision.

Even though there’s no evidence that his heat vision is stronger than Superman, Homelander wins this category because of his use of heat vision.

These abilities might not be that useful in a Homelander vs Superman situation. However, since both characters have them, we will be covering them.

X-Ray Vision allows both of them to see through walls and opaque objects. Meanwhile, Super Hearing allows them to hear inaudible frequencies for average humans. In addition, they can hear a conversation that is happening very far away.

Homelander and Superman both have this ability, and they’re comparable. So I don’t think it will make much difference in a Homelander vs Superman fight.

Fighting style and fight sense are two entirely different things. Fight sense is more important for any person to win a fight. It allows them to think and act quickly, even when they’re being overpowered.

There’s no doubt that Superman wins in this category. He has taken on people who are similar in strength and power. He has even taken down his clones (such as Bizarro), so he will have a lot of advantages while fighting Homelander.

Homelander may use some dirty tactics to get Superman on the ground, but he won’t be able to sustain it as Superman will quickly manage to counter him. So in this portion of Homelander vs Superman, Supes is the clear winner.

This is a bit of an unfair comparison in our Homelander vs Superman showdown. As we know, Homelander is just an ordinary human if he is stripped of his Compound V powers. However, Superman is a much more complex being.

Superman has been resurrected multiple times throughout his comic book history. The most famous incident is when he died while fighting Doomsday. As long as the bright yellow sun keeps glowing, Superman is nearly immortal. He doesn’t age like humans either, as he can live for billions of years.

On the other hand, Homelander is not immortal. Black Noir, Homelander’s clone, killed him in The Boys comic book, then, Butcher and his team later killed the clone as well. With the right technology, it is quite possible to clone Homelander, although it seems unlikely that Homelander can be revived.

This whole situation would raise a lot of questions, such as “What if Superman was beheaded?” The answer to that question is that he hasn’t been beheaded. We can’t find any instance of him getting beheaded, so he’s pretty much immortal.

Final Result Of Homelander vs Superman

In the verdict of our Homelander vs Superman showdown, we will have to crown Superman as the winner. Even if we assume Homelander had access to a source of Kryptonite, Superman’s superior tactical knowledge and fighting expertise would still likely win.

Superman is just way too experienced and refined as a skillful fighter, while Homelander only relies on his strength without any fighting sense. He will give Superman a run for his money, but Superman will easily beat him fairly and squarely.

So this was our Superman vs Homelander showdown. This entire article was based on the known facts of these characters. You’re obviously entitled to have an opinion on this matter. In the end, we hope you enjoyed this article.