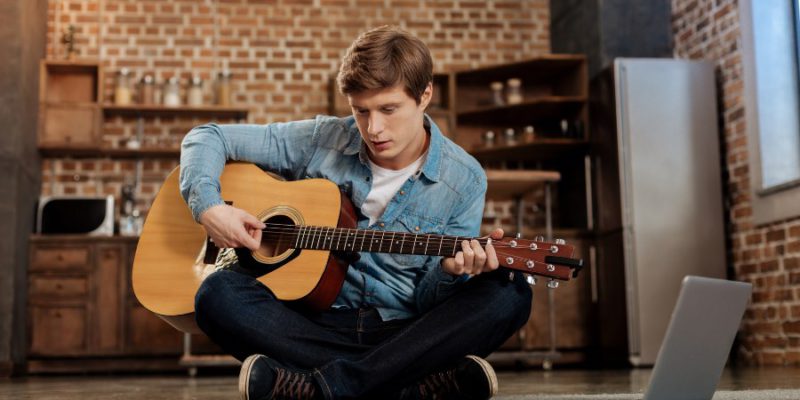 Reading guitar tabs could be a mystery for beginner guitarists but it is not rocket science to understand them. Even a single session of effort is enough to learn how to read guitar tabs completely.

In this article, I will guide you through all the rules of how to read guitar tabs.

What is Guitar Tab?

Guitar Tab or tablature is a method to describe guitar music using specific symbols like standard notations in sheet music to help you play the music. It uses very simple characters & numbers to describe the music. Reading guitar tabs is so easy that you may not need to go through this article twice.

Guitar tabs help you to play your favorite songs instantly. You don’t need to go through the trouble of sight-reading from the beginning & spoil the fun. Sight-reading or sheet music is much harder to understand & takes years of practice to learn. Most of the beginner musician starts to play music by ear then sight-reading.

One major issue to point out about the guitar tab is that you must listen to the music first to play it on your guitar. Without listening to the song, the guitar tab alone would not help like the sheet music to learn the music piece.

How to Read Guitar Tabs

To read the guitar tabs, you should have a clear idea about the strings, frets, and fingers’ numbering system. Here is how they are defined.

Sometimes, instead of using string numbers, some tabs use the name of the note of the strings. If a song is played in standard tuning, you will see E B G D A E instead of string number 1 2 3 4 5 6.

The numbers you see inside the lines are called the fret numbers. Frets are the metallic strips that go along the neck of the guitar. The first fret is the furthest one to the left of a right-handed guitarist. When you do not hold on to any frets, you are playing on an open fret, and in the guitar tab, you will find that is mentioned as ‘0’.

The numbers you see as marked in a circle inside a chord diagram are called the fingers’ number. Index, middle, ring, and pinky are the fingers you use to grab any note or chord, and they are numbered as 1, 2, 3, and 4 correspondingly.

Single numbers that go from left to right are called notes, and you play them one after another to construct a melody line. The numbers that stick together in a parallel line are called the chord and played at once.

‘P.M.—‘ represents the palm-muting, and the dash lines mean how long you have to palm-mute the notes. ‘x’ on a particular line means you have to mute that string completely.

If two numbers are joined with a backslash, that means you have to slide. For example, ‘5/8’ means slide from 5th  fret to 8th. Hammer-ons are denoted by ‘h’ and pull-offs by ‘p’.

Bending is a common technique in guitar playing. It is denoted by a curly upward arrow in the guitar tab. There are two types of bending: half step and full step bending. Both cases would be defined individually as ‘1/2 step’ and ‘full step’. If you see two curly arrows consecutively opposite each other, it means to bend and release.

Down arrow means downstroke, and an up arrow indicates upstroke when you are playing a chord. Usually, some arrow symbols are placed together to show the chord progression. Also, the v-shape symbol represents the upstroke, and the sign that looks like a thick dash with legs means downstroke.

Vibrato is played by vibrating the finger after playing or pressing a string on a specific fret. This oscillation is created by “shaking” your finger up and down as if creating a series of very brief bends. It is indicated by a tiny wave following the note to be pressed.

Some common guitar techniques are not standardized. Generally, the author of the tab mentions the meaning of the symbol on the tab to avoid confusion.

Now that you know what the symbols mean, playing music by using the guitar tab would be easy for you. There are plenty of guitar tabs available on the web.

But don’t get used to guitar tabs. After a certain period of time, you should try to play any song by ear. Playing music by ear develops your creativity and overall experience with the instrument. So, don’t rely on someone else to play a song. Instead, try to come up with your self-made guitar tab of the song.

Let me know in the comment section if you have any trouble understanding how to read guitar tabs. I will try my best to help you out.