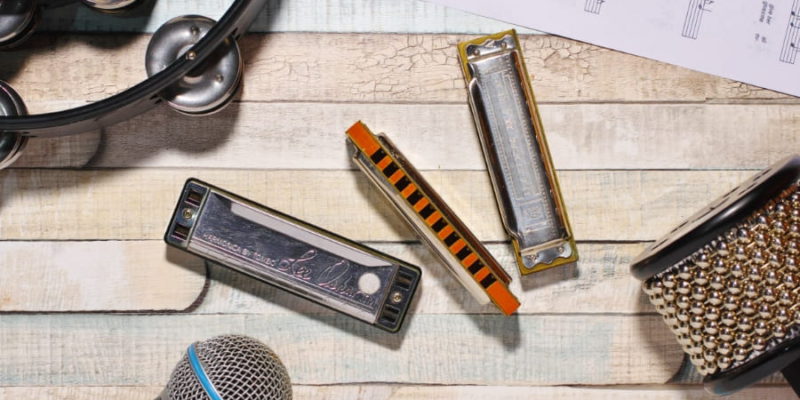 In this article, we are going to introduce you to some easy harmonica songs. Harmonica is an easy instrument to learn but difficult to master.

If you wish to learn, start with easy songs, and work your way up to more sophisticated ones.

The easy harmonica songs for beginners listed below are excellent choices. Moreover, this list is appropriate for both children and adults.

Although some of the songs may appear difficult at first, they are not. We are also going to introduce how to read harmonica tabs that will help to learn those easy harmonica songs.

“Alouette” is a simple song to learn on the harmonica and a lot of fun to practice.

It’s also a children’s folk song, although it’s in French and has Canadian roots.

It was initially published in 1879 and is said to have originated in France.

What’s fascinating is that it was brought to America and several other nations by allied soldiers during World War I.

“Alouette” is played on the harmonica in C and comprises only two lines.

This tune can be learned in just a few hours.

We are all familiar with this nursery rhyme. This cute sounding melody is completely on the major scale and is very easy to play on harmonica.

The melody is mainly concentrated on the bottom part of the harp. It sounds amazing without any extras (like dynamics or bends), so you can concentrate on the basics first.

Leaving On A Jet Plane

John Denver is regarded as one of the best songwriters in the country music genre in the United States. Along with “Country Roads,” “Leaving on a Jet Plane” is one of his most well-known tunes.

Learning these John Denver tunes is a vital step in developing a well-rounded harmonica repertoire for any beginner harmonica player.

“Stand by Me” by Ben E. King was inspired by “Stand by Me Father” by J.W. Alexander and Sam Cooke.

Nobody could have predicted how popular it would become.

There are currently approximately 400 recorded song versions of “Stand by Me” by a variety of performers, including John Lennon and Otis Redding.

Even as a beginner, you can simply sing along to the song and learn it quickly.

You only need a diatonic harmonica and should be aware that the song is in key A.

When The Saints Go Marching In

“When the Saints Go Marching In” was originally a Christian song, but it acquired popularity after jazz bands covered it.

Louis Armstrong made the first notable recording in 1938.

At first appearance, you might believe the song is difficult to play on the harmonica, but with a C major 10-hole diatonic and some practice, you’ll be able to master it in no time.

This song is an excellent starting point for playing with pop and rock melodies.

This is because “When the Saints Go Marching In” features simple chords and a chorus that is easy to learn.

Nobody knows where “This Old Man” came from, although the first version appeared in 1937 as a ballad Anne Gilchrist remembered hearing from a Welsh nurse in the 1870s.

The first version was called “Jack Jintle,” and it was a little different than what we know now.

“This Old Man” is a beginner song for the harmonica that is comparable in tempo to another nursery rhyme described previously, “Mary Had a Little Lamb.”

The only significant change is that the rising beat is used instead of a monotonous beat.

It’s difficult to argue that “Happy Birthday” is the most popular song in the world.

It is available in over 18 languages and may be played on any instrument and according to the 1998 edition of the Guinness World Records, this is the most recognized song in the English language.

The original tune was adapted from Mildred and Patty Hill’s 1893 ballad “Good Morning to All.”

You can begin playing without overblows or bends, and the song will only require four harmonica holes.

Then you can choose the “tough” version.

Another easy song for harmonica “Jingle Bells” was first published in 1857 under the title “The One Horse Open Sleigh.”

Originally, it had nothing to do with Christmas. It was intended to be a drinking song or a school choir song at first. It eventually became associated with the holiday season as a Christmas song in the 1860s.

The initial half of the song is simple to learn on the harmonica and will brighten any holiday gathering.

You’ll quickly master it, and your buddies will join in on the fun.

This is a pleasant and popular song to learn and add to your ever-expanding harmonica music repertoire.

“Amazing Grace” was published in 1779 and is still widely known as a religious song used for religious purposes today.

It’s one of those great songs for the harmonica that has a very simple nature and learning base. You can watch any video tutorial on the internet to learn this song quickly by yourself.

Summertime from Porgy and Bess

The song “Summertime” was written for the opera Porgy and Bess in 1935. “Summertime” is one of the most covered songs in recorded music history, with over 33,000 covers.

Even if harmonicas aren’t traditionally thought of as opera instruments, mastering this tune will vastly improve your musical theory knowledge.

When it comes to iconic tunes, “Let It Be” stands high on the list.

This song, which was released in 1970, was and continues to be quite popular.

Age has no bearing on whether this charming music is known.

Learning a Beatles song on the harmonica, let alone “Let It Be,” is astounding.

Having this in your back pocket for when you need it will undoubtedly cause jaws to drop.

Most people are familiar with the western folk ballad “Oh My Darling, Clementine.”

Percy Montross or Barker Bradford is credited with writing it in 1884.

It’s a simple tune to learn that uses the third, fourth, fifth, and sixth holes with the standard inhale-exhale approach.

For most beginning harmonica players, this should be a piece of cake.

Stevie Wonder’s “Isn’t She Lovely” is a bit more difficult.

This is one of Stevie’s most well-known songs, released in 1976.

If you want to feel good, studying this will be a lot of fun and worthwhile.

Because the original includes a harmonica, playing this on the harmonica is really rewarding.

While it is somewhat difficult, it will come in handy when you have a get-together and want to play a classic for everyone’s amusement.

No Woman No Cry

There is no better way to end this collection of beginning harmonica tunes than with Bob Marley’s “No Woman, No Cry.”

The song was published in 1974 and is still popular in reggae music.

If you follow any video tutorial or any sort of demonstration, you should be able to complete this within an hour.

This song can come in handy when you’re sitting down with family and friends.

When it comes to the legendary Elvis Presley, no introduction is required.

“Love Me Tender” was released in 1956 and may still be heard on the radio today.

Because of the slow-paced character of the song, this is quite enjoyable to play on the harmonica. As a result, it is considered an easy song for harmonica.

Using high notes, it will be a very enjoyable experience to hear this melody come to life as you master and play it.

What A Wonderful World

Most of us are familiar with Louis Armstrong’s wonderful and encouraging song “What a Wonderful World.” It is a jazz standard composed by Bob Thiele and George David. However, the song’s most popular version was played by Louis Armstrong.

This song is one of the most lovely melodies, which encourages us to enjoy the world’s beauty and wonder. Surely playing this melody on harmonica will bring a lot of joy.

Juke is an easy harmonica song that every beginner harmonica player learns to have fun with. Moreover, the song was initially intended to be a harmonica-only instrumental.

The song was written by Little Walter, a legendary Chicago bluesman who frequently collaborated with Muddy Waters.

The harmonica intro of this 1973 blues classic is well-known, and (fortunately for you!) it’s rather simple to play. Many of the lines in this track are played by repeatedly breathing in and out of the same hole, making it one of the easiest harmonica songs for the beginners.

“Kumbaya” is one of the most well-known campfire harmonica songs in the world.

The song originated as a folk song in the deep south, based on African spiritual music, and was most likely penned by enslaved West Africans.

Playing this song will make you popular around any campfire.

In The Good Old Summertime

“In the Good Old Summertime” is a song from the turn of the twentieth century.

This song became a long-lasting hit, and it inspired the Judy Garland film In the Good Old Summertime.

Shape Of My Heart

This song was about a card player who was more interested in unraveling the logic and mystery of chance than in winning. It was centered on the concept of a card player whose primary objective was to express no emotion, positive or negative, to discover the meaning of life beyond winning.

The song features a harmonica solo in the middle which is great to listen to. However, the harp solo is not very challenging to play. So, learn this sting song too.

Shell Be Coming Round The Mountain

These makes use of the harmonica’s range while also utilizing a diatonic melody.

This means you’ll be able to progressively work your way up and down the harp without any challenging melodic leaps.

This song’s concept is to simply have a good time. Just grooving out while driving down the road with pals. The song has an undertone and a secret subtext that says you can’t control what occurs in life, so you simply must let it go.

For a reason, this is one of Johnny Cash’s hallmark songs. This simple, rollicking tune has been a favorite of country music lovers for generations.

However, this blues and jazz vibe track is quite fun to play on harmonica.

This song, like “She’ll Be Coming ‘Round The Mountain,” has a stepwise melody that makes extensive use of the harmonica’s range.

It also sounds great with a few bends added in, giving you the opportunity to integrate personality and emotion into your approach.

Harmonica is no easy task. Mastering this instrument and memorizing song charts takes time, patience, and practice. Once you learn harmonica, you can simply perform the above recordings and hits.

We’re confident that this collection has provided you with a variety of options when it comes to selecting the ideal set of easy harmonica songs for a beginner.