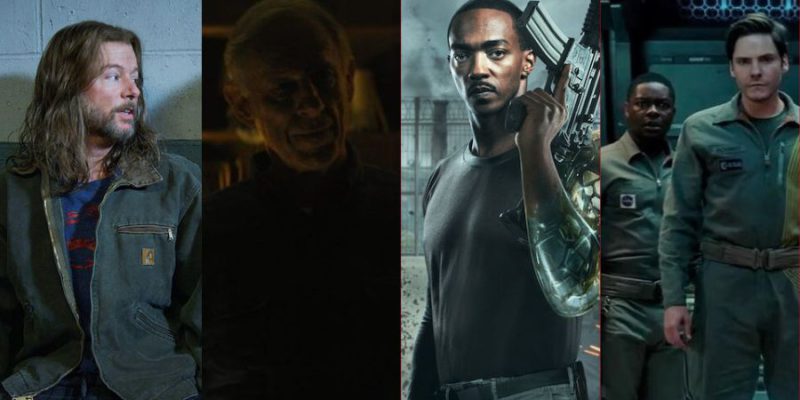 Netflix is the home to many movies, but not all of these movies are worth watching. Like any streaming service, there are some good movies, and some are laughably bad. The case with Netflix is also similar because there are some of the worst movies on Netflix.

Not all movies are made equally. Netflix has produced many amazing movies like The Power of the Dog, Don’t Look Up, and The Irishman, to name a few. However, it is obvious that every movie isn’t going to be a masterpiece.

Nobody likes turning on a movie and finding out that this movie is nothing more than a sophisticated arrangement of garbage. So we are listing down our picks for the worst movies on Netflix so you guys can avoid all these movies.

These movies aren’t ranked in any particular order because they’re all bad in one way or another, and we don’t discriminate here. Now, let’s jump right into our list of the worst movies on Netflix

Starting this list of the worst movies on Netflix, we have Marmaduke. It is a fairly recent addition to Netflix’s ever-increasing library of animated movies. This movie is an animated adaptation of 2010’s Marmaduke.

It gained mostly bad reviews from audiences due to its lackluster animation, plot, and comedy. Marmaduke is unpleasant on a visual level, confusing on a narrative level, and devoid of comedy. Many people went as far as to call it one of the worst animated films of all time.

The Last Days Of American Crime revolves around two guys and a woman who plan the robbery of a lifetime before the government broadcasts a mind-altering signal that will eradicate criminal behavior forever.

This movie is surely one of the worst movies on Netflix. If you plan to torture someone mentally, then make them sit in front of this 2.5-hour-long movie. Despite having a good concept, the film suffers badly. Moreover, it has the worst pacing for its length.

Oh, Ramona! is a romantic comedy movie. It is actually a Romanian movie but not a very good one. This movie is a coming-of-age story about a teenager named Andrei who meets an attractive hotel clerk who gives him a different outlook on life.

Oh, Ramona is released 30 years too late. Such “sexual comedies” are a thing of the past. You will not find this film funny even though it tries too hard. Due to its lackluster story, stiff acting, and forced humor, Oh Ramona deserves a spot on this list of the worst movies on Netflix.

Even a decent cast of actors can’t save a disastrous movie sometimes. Outside the Wire is the next entry on our list of the worst movies on Netflix. In this movie, a drone pilot dispatched into a combat zone is teamed with a top-secret android officer on a mission to prevent a nuclear blast.

You know the movie is badly written when a character has to explain the plot every few minutes. Despite a thrilling concept, the movie is full of plot holes and predictable twists. Overall, Outside the Wire is a mediocre and generic sci-fi movie that you should steer clear of.

The next entry on our list of the worst movies on Netflix is actually a documentary called Enter The Anime. You are better off watching actual anime or the behind-the-scenes of an anime rather than this.

Documentaries are supposed to be informative. However, Enter The Anime is nothing but a bore-fest. The interviews do not add any value to the viewers. Furthermore, the purpose of this documentary was to advertise a Netflix anime.

You wouldn’t be surprised to see an Adam Sandler film on this list of the worst movies on Netflix. The Ridiculous 6 revolves around an outlaw adopted by Native Americans who realizes he has five half-brothers. The men set out on a journey to find their wayward, deadbeat father.

It’s one of the worst Netflix original films ever due to Sandler’s hammy performance. Aside from the acting, the humor and story were also really bland. You can live peacefully without ever watching this movie.

A Fall From Grace revolves around Grace Waters, who feels refreshed by a new romance after being disheartened by her ex-husband’s adultery. Grace’s sensitive side turns aggressive as secrets destroy her fleeting delight.

Tyler Perry wrote and directed one of the most absurd films ever made. Even though he has directed some amazing movies in the past, this one falls short in many aspects. It is badly acted, poorly edited, and extremely dragged.

The Outsider is the next entry on this list of the worst movies on Netflix. In this movie, an American POW remains in Japan and works his way through the yakuza’s rites and tribulations to become a member of the criminal organization.

The Outsider is set in post-WWII Japan. Despite having such an exciting concept, the film really didn’t fulfill the expectations. The biggest critique people had about this film was its pacing. It is extremely slow, but not in a good way. The slow pacing takes away the overall experience.

Sometimes filmmakers go really over-the-top with comedy and fall face-first onto the ground. Sextuplets is a prime example of such a movie. In this movie, Alan realizes he has five siblings he’s never met. He vows to reconcile and meet his long-lost family before his kid is born.

Sextuplets follow a filmmaking formula that has been long forgotten. This film is dull because of its weak and terrible writing. Overall, this movie is easily one of the worst movies on Netflix. If you are looking to watch a comedy movie, then pick anything other than this movie.

Unless you’re a teenager, you’ll realize that The Kissing Booth is a really hot mess. It is surprising to see how this movie managed to get two sequels. The film revolves around A high school student who is forced to meet her crush at a kissing booth.

It’s not a decent film, and teenagers unnecessarily hype it. The Kissing Booth is extremely predictable and cheesy (not in a good way). So if you’re looking for a romantic movie, then some better options are available on Netflix.

Naked is basically Netflix’s take on Groundhog Day. In this film, Rob Anderson is getting ready to marry the woman of his dreams, but he can’t quite make it to the altar. He becomes trapped in a time loop, waking up nude in a hotel elevator again and over.

The movie starts off quite nicely but quickly becomes irritating. It has a good concept, but it eventually falls flat. Overall, Naked is definitely one of the worst movies on Netflix due to the poor handling of the movie’s script.

If you’re looking for a parody of the superhero genre, then don’t even come close to Thunder Force. This film takes place In a world where supervillains are widespread. Two separated childhood best friends meet after one of them develops a serum that grants them superpowers.

There’s no doubt that Melissa Macarthy and Octavia Spencer can be funny. However, even their good comedy chops can’t save one of the worst movies on Netflix. The script was bland, and the jokes were barely funny at all.

Another Adam Sandler movie makes its way on our list of the worst movies on Netflix. The Do-Over tells the story of Two down-and-out males who fake their own deaths and start anew with new identities, only to discover that the people they’re posing as are in far more danger.

Every reused joke from prior Sandler films has been blended together into a mind-numbing monstrosity in The Do-Over. Though you can give it credit for being slightly better than Sandler’s other movies on Netflix.

You wouldn’t expect a film made by J.J Abrams to be on a list discussing the worst movies on Netflix, but here we are. The Cloverfield Paradox revolves around scientists who test a technology to address an energy shortage in orbit around a war-torn planet and face another horrific reality.

The film looks really promising at first glance. However, it is nothing less than a hot dumpster fire. It features lazy writing with an extremely confusing plot. You won’t understand a thing even after watching The Cloverfield Paradox multiple times.

True Memoirs Of An International Assassin was Kevin James’ ride to Netflix land that met with an accident. After his fiction about a hired murderer is published as a true story, a novelist is mistaken for an assassin. However, he is abducted to aid in an assassination plan.

This film is surprisingly not funny or interesting. It is quite generic and doesn’t do anything to differentiate it from Sandler’s movies. True Memoirs Of An International Assassin ends up as a forgettable and one of the worst movies on Netflix.

Father of the Year revolves around two college grads’ drunken argument about whose parents would win in a battle. It is taken seriously by their fathers. Eventually, the friends come to terms with who their dads are as they begin to see the world through adult eyes.

Father of the Year is one of the worst movies on Netflix to come from Adam Sandler’s production house. You might have a chuckle once or twice throughout the movie, but that doesn’t justify the one-and-a-half hours you spend watching this movie.

Mercy is a thriller movie that revolves around four distant brothers who find themselves in a terrifying position when they pay their final visit to their dying mother and are forced to battle for their lives.

In a nutshell, Mercy is an extremely disappointing movie. There were some interesting aspects here, but they were severely underserved by the film’s careless, uninspired execution. So Mercy deserves a spot on this list of the worst movies on Netflix.

The last entry on our list of the worst movies on Netflix is Game Over, Man. In this movie, three nobodies are caught up in a hostage crisis in a Los Angeles hotel and must join together to save the day.

Game Over, Man is so bad that it is actually good. At one point, the film becomes so laughably bad that you actually start having a good time. It was humiliating to witness such a stupid effort to be amusing or original. So do yourself a favor by steering clear of this movie unless you need some guilty pleasure.

One can say that all of these movies can be enjoyed, which is somewhat true. You can enjoy even the worst movies on Netflix only if you know those movies suck.

So this list of the worst movies on Netflix will help you determine whether you want to watch these or steer clear of them.