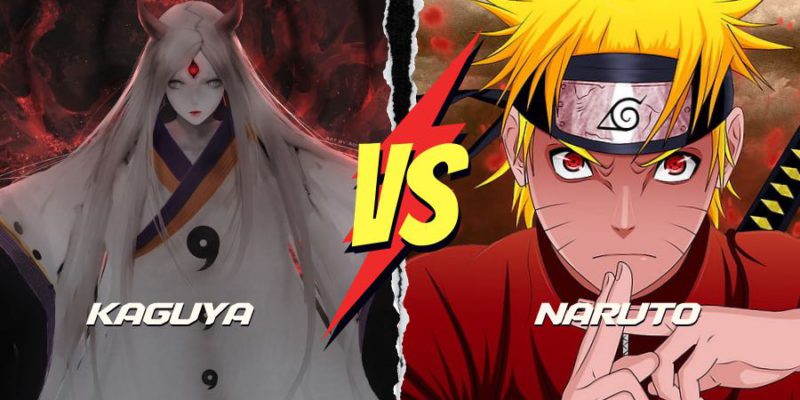 When you think of anime, the first person that comes to mind is Naruto. That’s how iconic Naruto is. Not only he’s iconic, but he’s also one of the strongest anime characters. However, he wasn’t the only strong character. If you have seen the show, you might remember Kaguya Otsutsuki.

Naruto Uzumaki may be a master of chakra, but Kaguya was the first person who ever wielded chakra on Earth. In the anime, we have seen a Kaguya Otsutsuki vs. Naruto Uzumaki fight, but that was more of a Team 7 fight. So what will happen if Naruto and Kaguya go face-to-face solo?

So in today’s comparison, we will discuss a Kaguya Otsutsuki vs. Naruto Uzumaki fight and figure out which one of them will come on top.

So in our battle between Kaguya Otsutsuki and Naruto Uzumaki, we are going to establish some rules. The first rule is that both of these characters will be at the peak of their powers. So we will be using an adult Naruto and a full-powered Kaguya.

As always, we will discuss some spoilers due to the nature of this article. We are going to discuss many story arcs from Naruto and Naruto Shippuden. So if you’re currently watching the anime, then proceed with caution.

Before delving deep into the actual Kaguya Otsutsuki vs. Naruto Uzumaki fight, let’s talk a bit about these characters individually. We will discuss their personalities, special abilities, and their fighting styles.

Naruto Uzumaki is a shinobi from the Uzumaki clan of Konohagakure. On the day of his birth, he became the jinchriki of the Nine-Tails, a fate that caused him to be excluded by the majority of Konoha.

Naruto was created by Masashi Kishimoto and is the main protagonist of the Naruto anime and manga. Naruto wasn’t always powerful. In fact, he was quite unhinged. His immense training under the guidance of multiple sensei, such as Kakashi, Jiraya, and Iruka, made him stronger and put him in control of his power.

Naruto used to be an emotional and quite boisterous teenager. Naruto is aware of his flaws and admits to acting tough to hide his humiliation and anger from them. However, as he grew older, he became calmer and wiser.

The adult Naruto deals with most situations maturely. Naruto has always been confident in himself and doesn’t step back from a challenge, making him such a great fighter. He’s willing to give his life for his loved ones and will go to any extent until he establishes peace.

Kaguya Otsutsuki was an Otsutsuki clan member and the matriarch of a branch family that included her offspring Hagoromo and Hamura. Long before the secret villages were established, Kaguya devoured the fruit of the God Tree and became the first chakra user on Earth.

Kaguya Otsutsuki made her debut in Volume #70, Naruto Chapter #679, and in anime, she appeared in Naruto Shippūden Episode #458. After consuming the fruit, she basically merged with the God Tree to become Ten-Tails.

There’s no doubt that Kaguya is immensely powerful. Despite not being too skilled in fighting, she can easily overpower any individual in the Naruto universe. A Kaguya vs. Naruto fight will not only be intense but destructive as well.

Kaguya also shows affection since she appears to care profoundly about the Earth, regarding it as a nursery that she does not want humans to destroy further. However, she wouldn’t step back when the time called.

If Kaguya Otsusuki and Naruto head into a fight, then there’s definitely going to be some hand-to-hand combat. As you might know, Naruto is an extremely skillful fighter. Even without the use of his Chakra, Naruto can fight enemies using his training.

Since he depends so much on his strength, we seldom get to witness his hand-to-hand combat skills. However, there’s no doubt that he’s a skillful fighter. On the other hand, Kaguya Otsusuki relies mostly on her technique rather than combat.

It is pretty evident that if both combatants were stripped of their powers during the fight, then Naruto would surely come on top. He’s simply much more agile and extremely skilled at fighting. Kaguya might be able to stand her ground, but in the end, Naruto would win.

At the end of each Naruto battle, the Chakra levels determine which character will come on top. Naruto’s body can hold an immense amount of Chakra. Naruto’s natural chakra reserves are at least 2 to 4 times bigger than Kakashi’s statement. Moreover, he also possesses Kurama’s entire chakra.

Naruto’s chakra and physical prowess are no joke, but Kaguya is simply much more powerful. Her basic chakra is believed to be more powerful than Ten-tails Madara’s, and she’s essentially immortal.

Kaguya Otsusuki’s ability to absorb any form of Jutsu gives her so much more advantage. Even though Kaguya isn’t much of a good physical combatant, she does possess certain unique powers, such as stopping an opponent and absorbing their chakra upon physical contact.

These abilities work in her favor and give her a huge edge in terms of a fight with Naruto. So, she’s the clear winner in this field.

Intelligence and combat awareness are extremely important to win any battle. So even if you have good fighting abilities but no intellect, you can easily lose a fight.

Nauto has battled many opponents and continues to do so. The current version of Naruto has become extremely mature and wise. He only makes calculated moves and takes calculated risks. All of his past experience proves useful for him.

Furthermore, Naruto is simply too clever at times. His cunning imagination allows him to fight in many more creative ways than other ninjas. It is quite easy for him to make do-or-die decisions in a split second.

If you look at Kaguya, then she doesn’t have much intellect when it comes to battle. Naruto can easily trap her in his plan. Naruto’s most notable mental skill is his ability to mislead his opponents, and considering Kaguya’s emotional and mental state, she can easily get misguided.

All the evidence is in favor of Naruto. So in this section of Kaguya Otsutsuki vs. Naruto Uzumaki, he’ll come on top.

There’s no doubt that Naruto can make quick movements and attack his opponents swiftly. However, Kaguya is just insanely fast. Kaguya could react to Naruto just fine, so speed blitzing is not too much of a threat for her.

She can also move exceedingly fast, as seen by her abrupt appearance before Sakura Haruno in the blink of an eye.  Subsequently, her quick reaction to dodge Sasuke’s teleportation-initiated Chidori also showcases her speed.

There’s no doubt that teenage Naruto was slightly faster than his adult counterpart. So, speed isn’t really that big of an issue for Kaguya. In this segment of our Kaguya Otsutsuki vs. Naruto Uzumaki battle, Kaguya takes the lead.

Ninjutsu is the heart and soul of the overall Naruto series. Despite the fact that she was active long before the advent of shinobi and, consequently, ninjutsu, Kaguya, as a tsutsuki, is capable of performing many Jutsu for which she does not need to weave signs.

She can use all five nature transformations and Yin-Yang Release because she has complete chakra mastery. She may use her long hair as an improvised weapon to capture and fling enemies about the battlefield.

Naruto isn’t any weaker in terms of Ninjutsu. He has many techniques that will allow him to stand his ground. He can easily counter many techniques of Kaguya. His most useful technique will be his Bayron Mode.

However, Kaguya is better as a whole. She can easily counter and beat Naruto’s ninjutsu techniques. So she’s a clear winner here.

Endurance is extremely important in any battle. It’s as important to take punches as just land punches. If a character isn’t strong enough to take hits, then he’s at a severe disadvantage.

In the case of Kaguya Otsutsuki vs. Naruto Uzumaki, both contenders are extremely powerful and can fight for hours. However, Kaguya takes the edge in this case as well. She’s basically immortal, and she can’t be killed.

Yes, she can be sealed, but for that, Naruto needs the help of Sasuke. We are discussing a 1v1 battle in this comparison. So Naruto can fight her for hours and even manage to dominate her, but the fact that she can’t die gives the upper hand and turns the tables in her favor.

If you’re a die-hard fan of Naruto, you might be slightly upset over this verdict. But we have to announce Kaguya as the winner of this battle. Kaguya has so many ways to defeat Naruto that it’s ridiculous. Her strength, hax, and regeneration all outperform Naruto’s.

There’s no doubt about Naruto’s capabilities. Kaguya can truly merge with nature and strike Naruto from a dimension he cannot enter. So Naruto is rendered helpless in this situation. Kaguya has many abilities such as that.

So we hope you enjoyed our comparison between Kaguya and Naruto. We have looked at various facts and figures related to both characters. As always, you can have a difference of opinion in this case, and we respect that.