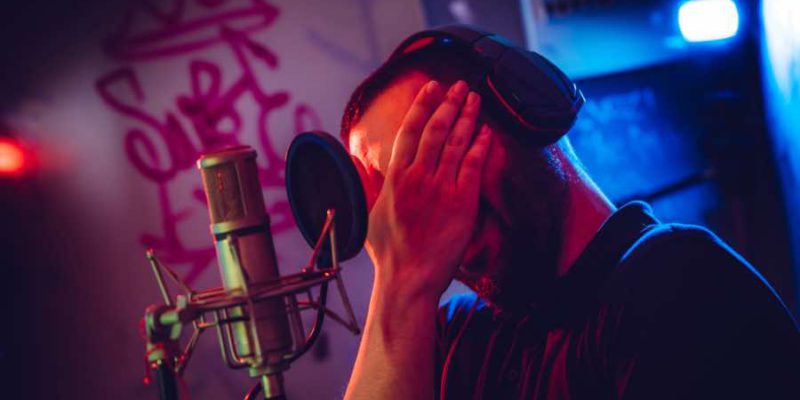 Emotional and sad rap songs are no longer a foreign concept in the industry of hip hop music. Music has always been a powerful way to express and convey emotions. Rap songs might seem too upbeat to listen to when you are depressed. Besides, people often think rap songs are about arrogance, brutality, and materialism.

But over the past years, the concept has changed. Rap artists are now expressing their emotional and touching feelings and dark thoughts into their compelling lyrics.

Well, someone must express what you are feeling inside and put them into words.  Aside from the stylistic and upbeat music, the emotional lyrics can focus on anything from breakups to suicide.

Like everyone else, rappers deal with their own sadness and sorrow. Some of them choose to hop on the mic and vent about it.

This article will round up the top 20 sad rap songs of 2021 that you can listen to and take care of your depressing mind.

Lil Tjay released this song as a valentine’s day gift to his fans. The song releases on February 12, 2021, with a music video directed by Cam Busby. In addition, American singer 6LACKS also appears in the song.

Calling MY Phone, talks about trying to escape the grasp of a former lover. The soft piano composition throughout the song sets a perfect vibe for the lyrics with a catchy beat.

Calling My Phone is the highest-charting single of both Lil Tjay and 6LACK. It is debuted as number three on the U.S. Billboard Hot 100 chart.

Making this one our number one pick in our sad rap songs collection.

2. Finesse Out The Gang Way

Lil Durk and Lil Baby have collaborated on several tracks. Finesse Out The Gang Way is their latest released sad rap song.

The song starts with a beautiful piano intro which carries the melody of the whole song. Lil Durk speaks about his struggling carrier in this song. Moreover, he talks about the death of his fellow Chicago rappers and his childhood friend King Von.

The song ends with a powerful verse from Lil Baby where he talks about his own come-up from the streets.

Pink Floyd inspired Canadian rapper and songwriter Tom Macdonald’s latest release is Clown World. This song is lyrically focused on the Black Lives Matter movement in 2020. It also points out the hot topic of 2021, which is gender roles and mainstream unisexualization.

With more than 15 million streams, this song hits the top 10 on Spotify’s U.S. Viral Chart.

Young Boy (real name Kentrell DeSean) had a successful run in the last year with three No. one projects on the Billboard 200. Toxic Punk is his first track of this year, produced by Dj Trebble, Dmac, and TnTXD with a guitar-driven trap melody.

In this sad rap song, YoungBoy raps about the drug’s toxic effects on his life.

Canadian musician Nova Paholek collaborated on this track with MacDonalds.

MacDonalds dissolves American rappers Eminem and Cardi B for being perceived as role models in the song’s intro. He also protests against the idea that white privilege exists and black lives matter.

Rod Wave wrote the song Street Runner as a letter to his girlfriend in Florida. In this song, Rod Wave calls himself a street runner, busy chasing the success of life.

Rod Wave apologizes to his girlfriend for not staying by her side in her Time of need. Now he misses her touch, laugh, and holding her hand. The piano composition throughout the song fits the lyrics brilliantly.

YoungBoy has six kids. He likes to spend as much Time as possible with all of them.

Dallas rapper Mo3 and Kevin Gates collaborated on this emotional rap song. In the middle of beautiful women, luxurious cars, friends, and cash, they rap about the harsh reality of their life.

The Northside street artist covers the awful tale with a light-hearted vocal complementing the beat, describing the blunt realities of his life, alliances, and sneaky women. Kevin Gates describes his feelings to phony friends, how his mother lives, and falling in love with hookers.

Mozzy’s emotional rap song, I Ain’t Perfect, features Blxst on the hook. Mozzy reflects on moments of his past life from a birds point of view with a fancy lifestyle. After becoming successful in music, Mozzy looks back on the trauma that he has experienced.

The song video reflects Mozzy’s local hangout throughout the neighbourhood. The clip pairs perfectly with the melancholy lyrics. The song demonstrates Mozzy’s battle with depression and his awareness of societal discontent.

P2 is the sequel of Lil Uzi Vert’s 2017 single “XO Tour Llif3”. It is composed in the same melody as the original track.

P2 stands as part 2. Like the sad rap song “XO Tour Llif3”, in P2, Lil Uzi Vert raps about his ex-girlfriend’s issues and addiction to substances.

Suicidal is a song about the emotions of depression and hate Melly develops after breaking up with his girlfriend. The anger and suffering are at such high levels that he considers losing his life.

He also says that this suicidal thinking is not his own. The toxicity of his partner’s affection led Melly to this situation.

HOTBOII write this song to dedicate his late friend. In this song, HOTBOII plays with the idea of living a fast life. He clears the concept that time waits for none. In the end, you must play fast with the time.

Lil Baby added a verse to this song in a remix version. And definitely, this version sounds more interesting than the original HOTBOII composition.

The Kid Laroi is a 17 years old rising star from Sydney, Australia. We can see some of the largest youth rap forces coming together to produce a high graphic success on this latest song. The kid LAROI is lower in the States than Tecca, but the 17-year-old gets a lot of buzz in his native Australia.

Lil Durk presents himself as the voice of the streets in this sad rap song. Despite his huge success, he is still grounded in the hood life.

Lil Drake sets about encapsulating the gist of his beleifs united with specific explanations. Even though he keeps it real throughout, he is still going to have his doubts.

This track is not the sample of the famous Kenye West track with the same title. Although, Rod Wave use the reference.

On Through the Wire, Wave raps about his substance problems almost killing him and reveals he was high when his car crashed: “He raced and hit a pole, a head-on accident / He went to think ‘about my lifestyle, that lost my vision.’ We see him in the video sitting against his own broken sedan.

NF (real name Nathan John Feuerstein) is familiar as a Christian rapper. He raps with Hopsin in this song.

Lost’s deep lyrics will remind you what resiliency, anger, trust issues, and paranoia will sound like. The song is powered by gripping beats to deliver the aggressive and stupendous rapping flow of both artists.

Californian rapper Tommy Kristo brings a new level of creativity and emotion to this track. In this song, Tommy Kristo expresses his feelings for his former lover. He is so lonely without her that he feels no attraction to life anymore.

Sixteen years old teen Nuskisquad is a famous rapper from Missouri. In this track, NUSKI delivers his pain-filled lyrics with another rising hip-hop/rap artist Toosii. The song lyrics flow perfectly with a catchy uptempo beat.

Rising star Bradley Cowens Jr. is famous by his stage name Kam Dutchie. The song Pain was premiered with a music video on February 7.

The video solemnly opens with a drive past a cemetery, and Kam Dutchie continues to explain the sad story. He puts roses to the memorials and describes his struggles with romantic relationships and family traumas. Making this one our last pick in our sad rap songs collection.

This is our list of our favorite sad rap songs. Let us know about your favorite from the above list. Also, if you have any personal favorites, share the songs with us in the below comment box.