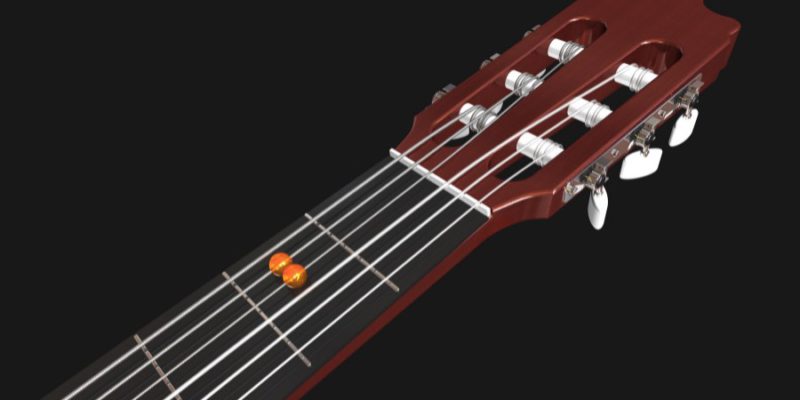 First off, what do you think when you hear sad guitar chords? The first thing that comes to our mind is something of low volume. Not very hype, a sound that you will love to hear when you are alone. Something sad, dark, or maybe hopeful.

Sad guitar chords can create an environment like something that you will love to play or hear on guitar at the top of a green mountain looking into the vastness of nature. Sounds soothing, right? That’s the feeling related to sad sounds.

A sad guitar chord is usually a minor chord, a 7th chord, a diminished chord, or a suspended chord. But any guitar chord can sound sad if you can apply it in the appropriate context.

In this article, we will explore why something sounds sad and learn some beginner-friendly sad guitar chords. Make sure to check out our emotional guitar chord progression ideas and examples too.

What are sad guitar chords?

Sad chords are usually created with the help of minor chords of the guitar. Most sad guitar chord progressions use minor chords combined with some major chords to create a proper rhythm of emotional music.

Guitar chords that sound sad or emotional when you hear them by themselves are sad chords. But, the reason why we perceive a chord as sounding sad is dissonance.

Dissonance is the impression of something tense or incomplete. When we hear a dissonant chord (minor chord), it creates tension or an urge to complete the sound with a consonant chord (major chord) which gives the sound stability or resolution. As this tension is created by dissonance, we interpret the chord as sounding sad.

Minor chords, despite their name, are a very important type of chord in music. The sound of a minor chord is generally described as sad or gloomy.

Turning any chord progression into the minor key has long been thought to make it sound sad or melancholy. You can see this by yourself; try playing any simple major key chord progression like E-B-A. Now change the same progression to a minor key, and you will see that it instantly sounds more sad or emotional.

This will work with any chord progressions, though some minor chords will be more emotional than others, such as the D minor key. Just adding some minor keys will make your guitar chords sadder.

There are several popular sad songs out there that use major keys or use them in combination with minor keys. It is all about perspectives and context, as all things in music are. “Tears in Heaven” by Eric Clapton for example is one of the saddest songs in A major.

If you hear major keys and minor keys of the same root note side by side, you will see that generally, minor chords create tension, disorder, or instability. In contrast, major keys create a resolution, triumph, stability. Balancing between these two gives you a good starting point towards creating your sad song composition.

A very easy way to start creating your own sad song is to use several minor keys and throw some major keys in your chord progression.

There are many other chords derived from major and minor keys that sound sad. For example, the major and minor variations of 7th chords. The sound that the 7th chords produce is usually described as cool and jazzy.

The minor 7th chords are simply the chord where you play the minor chords plus the 7th note.

The minor 7th chords sound emotional with a touch of triumph. So, playing these chords in your sad song can give a sense of power or redemption.

For example, try playing the open Am7 chord as shown below, and you will see that it adds a bit of hope at the end of the sad Am chord.

For example, Cmaj7 is a beautiful chord which can create a lonely environment and a feeling of anxiety.

Suspended chords, generally known as sus chords perfectly fall between dissonant and consonant sounds. These chords are created by substituting the third note with the second note (sus2) or the fourth note (sus4).

Sus chords create a great open-sounding sound that is eager for a resolution.

When I hear the Dsus2 for itself, it gives me a feeling of pitiful sadness or loneliness. It has this really lovely open sound, and it can work in different contexts.

While the Dsus4 by itself gives me a feeling of resolution or a sense of closure to my sadness.

The sus chords create an open sound due to the chord’s lack of a major or minor third. The sus2 reacts with the root note, and the sus4 reacts with the fifth of the chord to create dissonance and thus, tension.

As the name suggests, diminished or dim chords sound weaker than the major chords. Their tone is tense, unstable, and a bit dark. They can be very upsetting when you hear them, even without context.

A diminished chord is a chord of four notes, and every note is a minor 3rd above the previous note. They are used quite a lot in various genres. Dim chords can be a good fit in transition between two other, more stable-sounding chords.

A notable example of the usage of diminished chords would be the song “God Only Knows” by the beach boys. Similar to minor chord sounds representing a murky and gloomy sound, the diminished chords will give off the same sounds but amplify the feeling.

To me, the Ddim chord is as dark as you can get in a song.

A lot of different types of chords that we described above that may potentially be sad. This doesn’t mean that you need to learn all these chords and implement them in a sad song you want to create with your guitar.

Chords are an essential part of songwriting, yes. But harmony, melody, lyrics (if there is any) are equally important. You can even create a very sad song with the combination of just 2 – 4 chords mentioned above. Let’s see some sad guitar chord progressions below that you can learn right now.

To keep things simple, we are discussing some chord progressions in a single key without leaving it and just change the notes’ type to one of the types we discussed above. Here, I will choose the D key. This is because when I was a beginner, the very first key that I learned to play on guitar was the D key.

First, the notes in the D major scale are:

One of the simplest but saddest chord progressions you can play with any key scale is the I to iii chord change, which is a tonic to a mediant.

On the D major scale, that would be going from a D major to an F# minor. This simple chord progression is maybe one of the saddest tones I have heard. Going to that F# minor is very depressing.

You can just try strumming the string with these chords with a melody, and I am sure you will feel the sadness. One example of this I to iii chord change on the D scale is the depressing song “Hey there Delilah” by the plain white T’s.

If you want to get more depressing and sad, then a simple piece of advice is to just start with a root major note and surround it with a whole lot of minor chords (chords ii, iii, and vi to be exact). On the D major scale that would be:

This example is obviously inspired by a famous sad song which is “It will rain,” by Bruno Mars. When writing a sad song, throwing in a lot of minor chords is generally a good starting point.

This example is inspired by the song “Other side of the world” by KT Tunstall. The song’s lyrics talk about a long-distance relationship, how lonely it is, and how sad it gets when reality hits and everything breaks down. It is an unfortunate and depressing chord progression.

But when I listen to this chord progression myself without any lyrics, I get the feeling of nostalgia, and that makes me sob. It reminds me of all the happy times in the past and how tough life gets as we grow up. So, guitar chords can be sad based on perspectives and context as well.

Music is very objective. We established before that major chords are happy and minor chords are sad. But this is not necessarily a fact. It depends on what we judged as sad tones while growing up.

The context of a song also plays a crucial role in making a song sound sad. The lyrics, melody, story behind the song-writing, tempo, and other things play a major role in creating a depressing mood.

So, it is really important while writing a song to use the sad guitar chords that you perceive as sad. And know exactly what feeling you want to convey and to whom. Understand your personal emotional intelligence and your audiences’. And most importantly, experiment with different key scales and notes to create something that you yourself will cry on while listening. Experiment with everything, mix and match different chords and create something honest and real !!

All the chord Images you see in this article are credited to UBERCHORD.