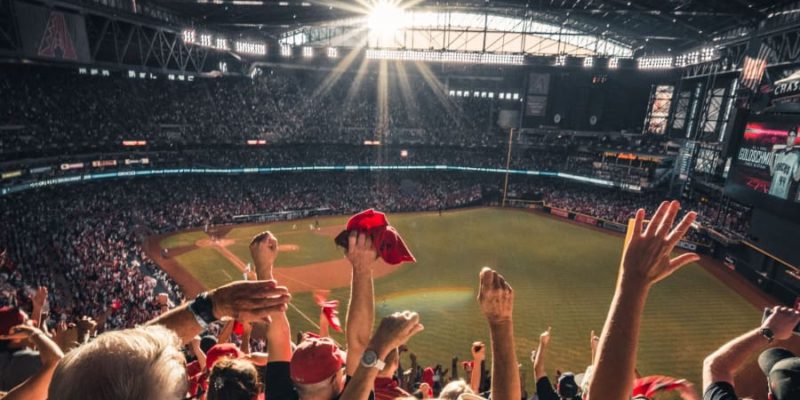 Music has been a part of the game for a long time but in the 21st century, individual walkup songs have become widely popular among baseball fans. These songs not don’t only cheer up the crowd but also creates momentum. So, all the major baseball tournaments keep the arrangements for walk-up songs, and most league baseball players use their own unique walk-up songs. People often know a player by the song.

Baseball walk-up songs serve many purposes. It works as an inspiration to pump up the entire crowd as well as the player. People also get to know more about their favorite player’s personality. That’s why these songs are of different varieties. Some are loud and tough, some are funny, and some are deep. What can be a better way than music to express a player in the ground other than his skills? Also, music adds a different level of enjoyment to the game.

So, what are the best baseball walk-up songs? Let’s find out.

Crazy Train is one of the most popular baseball walkup songs for a long time. Originally. It was Ozzy Osbourne, the heavy metal vocalist’s debut solo single. The Braves legend used this song as his walk-up music during his 19th season. Crazy train has a very interesting intro that can cheer up the crowd in no time.

Whole Lotta Love is a song by the English rock band Led Zepplin released in 1969. It was the opening track of their second album. Baseball player Joey Wendle uses this song as his walkup music.

Whole Lotta Love belongs to the hard rock and blues rock genre. Even after 50 years, this song stands as one of the greatest heavy rock tracks of all time.

Dangerous belong to the genre of hip-hop and rap. The song was released in 2006 on the album, “Chemically Imbalanced” – by Ying Yang Twins and soon it became quite popular among the listeners.

It has a smooth melodious tune that creates a slow dancing environment among the audience. It’s like a mood creator. An awesome choice for an introduction at the baseball field.

Baseball pitcher Mariano Rivera uses this song when coming out on the field. The song became so intertwined with his career that everyone will have to think twice to use this song at the Yankees Stadium for a walk-up.

Originally the song was released in 1991 by the famous heavy metal band Metallica. Enter Sandman is a song from their self-titled fifth album.

Paranoid is one of the best baseball walkup songs and quite unique. Originally Black Sabbath released this song back in 1970. The introduction of this song goes very well with the baseball walk-up vibe. Surely it will cheer up the crowd on the field.

However, Black Sabbath has some more awesome hits but this one is a better match for a baseball walkup.

“Hell’s bells” has an introduction that suddenly creates a calm but serious environment. A perfect choice for a serious baseball player’s walkup entry.

This metal generic song is a creation of AC/DC, an Australian rock band. It was released in 1980 in the album called  “Black in Black”.

Johnny Cash does not need any introduction. “God’s Gonna Cut You Down” was released in the album, “American V: A Hundred Highways” in 1956. If you are a classic country song lover then nothing can be more intimidating than this one. The music with a beat of claps is all you may need to create momentum among the crowd.

House of Pain – Jump Around

Get yourself and the crowd pumped up with the “House of Pain”. This song is especially among the people’s favorites for any sport. Popular sportsmen like Manny Parra and Brian Wilson happened to use this song.

The song was released in 1992 in the self-named album of “House of Pain.”

Hello to the fans of  Game of Thrones. So, there is no doubt how awesome this music is. For baseball walk-ups, the famous baseball pitcher, Noah Syndergaard uses this song. However, there are some other players like Hunter Pence, R.A. Dickey, and Jayson Werth, who choose this song as their walkup music. You are sure to get goosebumps when listening to this one. A true masterpiece by Ramin Djawadi.

Here is one more recommendation from AC/DC. Thunderstruck by AC/DC is an awesome baseball walk-up song. The melodic electric guitar’s sound and the dramatic intro make the song a perfect match for a baseball walkup

This award-winning Heavy metal and Rock song by AC/DC was released in 1990 and was also used in the movie named “Live at Donington”.

“Welcome to the jungle” is among the genre of hard rock. It was released in 1987 by the American rock band Guns N’ Roses as one of their debut songs.

There is a long list of baseball players who used this song as their walkup. Mark McGwire, Randy Johnson, Kerry Wood, Carlos Beltran, and Joakim Soria, are among the most popular player who made this song their own on the field of baseball.

The Lion King is one of Disney’s most popular movies, and this music has become the signature song for many sportsmen. It’s like telling the audience that the lion king is coming to rule the field. Undoubtedly this one is a great choice for a unique entrance. Mets’ slugger Yoenis Cespedes used this music as his own walkup anthem on the field of baseball. It has been among the fan’s favorites.

Eminem needs no introduction and nor does his songs. Lose Yourself is alike. This rap-rock hit was released in 2002 and used in his semi-biographical movie, “8 mile”. It can be one of the best baseball walk-up songs on this list.

Lose Yourself was used by the Yankee great, Derek Jeter during his final plate appearance at Yankee Stadium as his walkup anthem.

As a baseball walkup anthem, this song is like made for it. A perfect song for a perfect entrance by any aggressive players. It’s like telling the crowd that they are about to watch some confident hard performance. Blue Jays outfielder Randal Grichuk uses this one as his baseball walkup song.

Looking for something smoother and classy on the list? Then here it comes. The Man is a great choice for playing in the background when making a bold entry. David Ortiz and Tulowitzki happened to use this song to make an entry.

The song was released in 2013 by the American artist Aloe Becc in the album “Lift Your Spirit”. Currently, the song has over 55 million views on Youtube.

Fly Me To The Moon – Frank Sinatra

Not necessarily everyone has to make an entrance with a boom and hardcore music. A classy song with deeper meaning such as Fly Me To The Moon can also touch the hearts of the crowd.

The song goes slow but its lyrics make it a tricky-meaningful baseball walkup song. This Jass come pop hit may be a very unique choice for mastermind players. Mets’ slugger, todd Frazier used this one for his entrance.

Turn Down For What – DJ Snake & Lil Jon

This energetic music is among the top favorite in every stadium and arena. Sportsmen like Yasiel Puig, Justin Turner, Justin Upton, Shin-Soo Choo, Anibel Sanchez, Ben Revere, and Matt Joyce are among the most popular ones who used this song as their entrance anthem.

Who hasn’t heard bad blood? We don’t know. But if you want to see the crowd singing along, then this one is for you. Bad Blood was released in 2014 and now it has over 1.5 Billion views on youtube.

Your Love – The Outfield

This baseball walkup song is used by the outfielder Charlie Blackmon. “Your Love” is one of the biggest hits by The Outfield. The song was featured in their debut album, “Play Deep” in 1985.

Load Up The Bases (The Baseball Song) – Whiskey Falls

“Load Up the Bases” has the perfect intro to get some goosebumps. It’s like an actual baseball song. The beats and the simply awesome lyrics are the perfect combinations a classy player would look for as his walk-up anthem.

The song was released in 2007 in the self-named album Whiskey Falls.

Centerfield belongs to the genre of pop and rock. You can call it a pure baseball walk-up song.

“Put me in, couch, I’m ready to play today” that’s how eager the player is to put a bold performance. It tells how in the mood he is today. The song puts a classy and confident impression on the crowd.

The song was released in 1985. It was the title track of the album “Centrefield”.

Boogie Nights may be an old song, but we all know old is gold. And that’s what this 70’s hit is. Many players have used this song as their walkup anthem. It’s a disco track that makes you start dancing. The term “Boogie nights” was made famous by this song.

The New York Mets’ pitcher Noah Syndergaard uses this song for his walkup. This musical track gives more of a scary impression. Goes very well with the big hitters and challenging players who hold onto an angry mood. This track was released on 1936.

Looking for something new? Imagine Dragons’ Thunder can be the best of your choice. You may already know how popular this song is. Players like Clint Frazier, Joc Pederson, Steve Pearce, Jake McGee, Brandon Snyder, and many others like to use this one as their walk-up song.

The song was one of their popular hits from the album released in 2017 called “Evolve”.

Montell Jordan – This Is How We Do It

The song we could not miss to add to this list of baseball walk-up songs is, “This is how we do it”. It is the debut single by the American singer Montell Jordan, released in 1995. No wonder why Derek Jeter requested to use this song in his first major league.

So,  that concludes our list of 25 best baseball walk-up songs.  Baseball walkup songs don’t only cheer up the crowd, they also tell a story about the players. And people often expect a performance based on what song they have picked. That’s how crucial these songs are.

If you are a baseball player, you can also choose one of these best baseball walk-up songs that inspire you. We hope you liked these songs.

Our List Of Best Songs About Winning, Glory & Inspiration

This article is intended to give you a quick overview of all drum ...