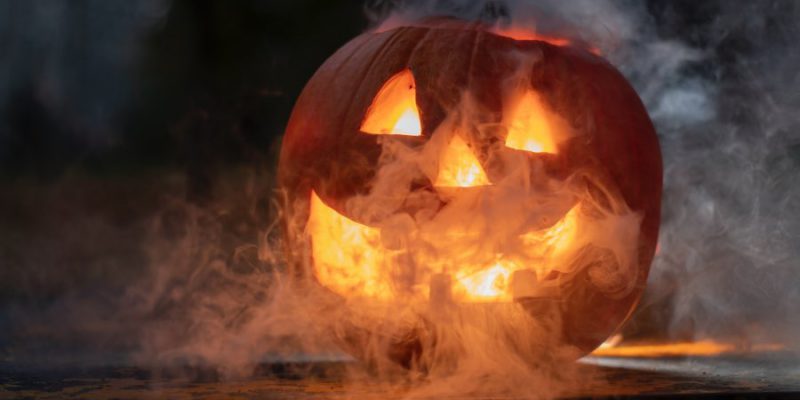 The spooky season is upon us. There is something special about the days leading towards Halloween. A Halloween without horror movies is incomplete. We all love curling up on the couch and watching our favorite horror movies in this slightly chilly weather.

This spooky and chilly atmosphere enhances the overall experience of watching a horror movie.

This is one of my favorite times of the year. I personally do not watch horror movies throughout the year except in October. So, if you are looking for a movie marathon or simply planning a movie night on Halloween, then here is a list of our top 15+ horror movies to watch on Halloween.

Halloween movies do not essentially need to be pure horror. Surprisingly, there is a lot of diversity when it comes to Halloween movies. These movies range from comedic horror to gory slashers.

We have picked the best of each sub-genre for your ease. So let’s dive right into it.

Kicking things off with a classic horror movie that has paved the way for many movies and is a huge part of pop culture. We are talking about the classic Frankenstein, directed by James Whale.

This classic movie helped popularize the monster we all know and love called Frankenstein. However, credit must be given to Boris Karloff, who beautifully portrayed the role of this monster.

Even though it is not an entirely faithful adaptation of Mary Shelly’s work, it is still as intriguing as it can be. After all these years, Frankenstein still holds its ground.

Psycho is another classic on this list. It is directed by the legendary Alfred Hitchcock. It is rightfully regarded as one of the best slashers/atmospheric horror movies. This film is a cult classic and a masterclass in terms of making horror films.

Anthony Perkins portrays the role of the sinister Norman Bates very convincingly. His performance will send chills down your spine even after multiple viewings.

The iconic shower scene is the best scene in any horror movie, in my opinion. The pacing is amazing and the entire movie will keep you on the edge of your seat.

Long before Sam Raimi directed the iconic Spider-Man movies, he was known for his Evil Dead franchise. However, we are specifically focusing on the first film of this franchise titled The Evil Dead.

Every scene in the film is gory, creepy, and disturbing. The film is shot so well, even on such a tight budget. The whole film is Raimi’s love letter to the horror genre. If you love campy and gory 80s movies then this is just the right pick for you.

It is a perfect movie for a fun Halloween movie night. In fact, the whole trilogy is very enjoyable and can be watched in a single sitting.

Any list about Halloween movies would be incomplete without mentioning a movie directed by Tim Burton. Beetlejuice is a comedic horror movie starring Micheal Keaton and Wynonna Ryder in lead roles.

The visuals of this movie are beautiful, comprising dark and gothic cinematography. In addition to the cinematography, the visual effects are very effective and trippy.

The entire cast is just perfect but Micheal Keaton shines as the titular character. If you don’t like harsh and suspenseful horror movies then this is the one for you.

The Shining is probably one of the most influential horror movies ever made. People still love to dissect the film with their theories. This is probably Stanley Kubrick’s most famous (and least weird) movie ever.

Jack Nicholson is very well-known for playing deranged characters and his performance in The Shining proves that nobody is better than him when it comes to playing psychopaths. His performance is the backbone of this film.

The film also shines in terms of technical aspects. Additionally, the snow and chilling environment of the movie really sets up the mood.

Who could’ve guessed that Jim Halpert from the office would one day give us one of the most unique horror movies? John Krasinski directed and stars in A Quiet Place.

The film is received critical acclaim for its sound design and unique concept. I’m not saying it hasn’t been done before, however, on this scale, it works much better than you might expect. The film delivers some of the most intense scenes without a single line of dialogue in them.

A Quiet Place is one of the most suspenseful films I’ve ever watched. I sat on the edge of my seat several times throughout.

There are not many people who have not watched A Nightmare on Elm Street. The movie is something 80s kids grew up with. It was directed by Wes Craven. It stars Robert Englund in the iconic role of Freddy Kruger.

Freddy Kruger probably has one of the most frightening and creepy character designs in horror movies. The film reinvented the slasher genre which was mainly known for its overuse of gory sequences. However, A Nightmare on Elm street is actually very smart and uses its scary moments effectively.

This film itself has become a huge part of Halloween culture.

Get Out is Jordan Peele’s masterpiece, in which racism is used as a medium for supernatural horror.

It’s a visually stunning film, with sophisticated and eerie cinematography and editing, furthermore, it features some shockingly bizarre visuals that add to the overall experience of the film.

The film makes you uncomfortable and the twists and turns in the story will keep you guessing. Daniel Kaluuya’s superb lead performance is the highlight of this film. In fact, the film will stay in your head for a long time.

If you are like me then whenever you hear the name of this movie, the catchy theme song instantly starts playing in your mind.

Ghostbusters is indeed one of the greatest and well-known horror-comedies ever made. It is directed by Ivan Reitman and has a star-studded cast including Bill Murray, Dan Aykroyd, Ernie Hudson, and Harold Ramis.

If you are looking for just a light-hearted movie to watch on Halloween then who are you gonna call? Ghostbusters, obviously.

Andrés Muschietti is the director of IT. The film was released in 2017 and is an adaptation of Stephen King’s work.

IT is a very well-made horror movie. It is truly a scary film and is not full of loud, jump scares; in fact, the genius cinematography and sophisticated shadow play are a big part of what makes this film unsettling.

The CGI is also very good and some sequences are very surreal. The film is much darker and mature than the previous adaptation. Andres Muschietti has done the source material justice. In short, the movie is truly a modern horror masterpiece.

George Romero’s work can’t be ignored when we are talking about horror films. Night of the Living Dead is directed by Goerge Romero. It is regarded as the hallmark of modern horror movies and zombie movies.

If you enjoy classic horror films, you will love Night of the Living Dead. It’s held up fairly well over time, and when you learn about the filmmaking methods used at the time, you’ll have a lot of respect for the director.

This film changed the horror genre completely and became an instant success. It is a very entertaining movie to watch on Halloween.

The Silence of the Lambs is directed by Jonathan Demme. Anthony Hopkins stars as a truly deranged and psychotic serial killer known as Hannibal Lecter.

The film has a timeless quality to it. It is one of the best serial killer movies ever made and set the benchmark for them. Anthony Hopkin’s performance will send shivers down your spine.

A slight warning, the film is not for people with faint hearts because it features quite a lot of well-shot disturbing sequences.

Another Wes Craven film on this list is Scream. This man just knows how to create evergreen horror movies.

Scream is a horror mystery film that will glue you to your seat. You wouldn’t want to miss a single scene of this movie because the story is very gripping. The production values are excellent with atmospheric photography and settings. Furthermore, the music is just perfect.

Scream is one of the most original horror movies with some genuinely scary scenes.

This film is obviously not real however, it is shot in such a way that it actually feels like a real film. In addition, the film was marketed as real footage captured by a group of students.

The Blair Witch Project resurrected the found footage film genre. The most notable feature of this movie is its realism. The film makes good use of sound. All of the scary sounds heard throughout the movie will give you a nice fright.

Not many movies are able to make an impact on a genre of this size. William Friedkin directed The Exorcist and it has become a go-to horror movie for many people.

The Exorcist remains a powerful film even more than forty years later. Every aspect of the film is just perfect. From the creepy and unsettling makeup to the bone-chilling music and sound design, it all blends perfectly to create a true horror experience.

If you are really looking forward to giving yourself a good scare then this film will definitely leave you sleepless for the night.

You probably saw this one coming. Of course, this list would be incomplete without mentioning a movie that is actually based on Halloween.

Directed by John Carpenter, Halloween is a slasher thriller film. What differentiates this film from other slasher movies is that Carpenter allows the viewer to see through the eyes of the killer with the subjective camera.

It is a must-watch for the occasion of Halloween. Many people have tried to imitate the techniques utilized by the filmmaker in Halloween but the results haven’t been that good.

Whether you’re looking for a classic horror movie to watch on Halloween or something new and exciting, we hope this list has helped you find the perfect film for your evening. From slasher films to ghost stories, there’s something for everyone on this list. So sit back, relax, and enjoy some of the best halloween horror movies that cinema has to offer.

To conclude, I would like to wish you all a spooky Halloween and if scary movies are not your cup of tea then you can check out our list of Horror TV Shows as well.

These horror movies will cover the weekend leading to Halloween and you can enjoy them alone or with a group of loved ones.

Why Robert Pattinson Could Be The Best Live Action Batman