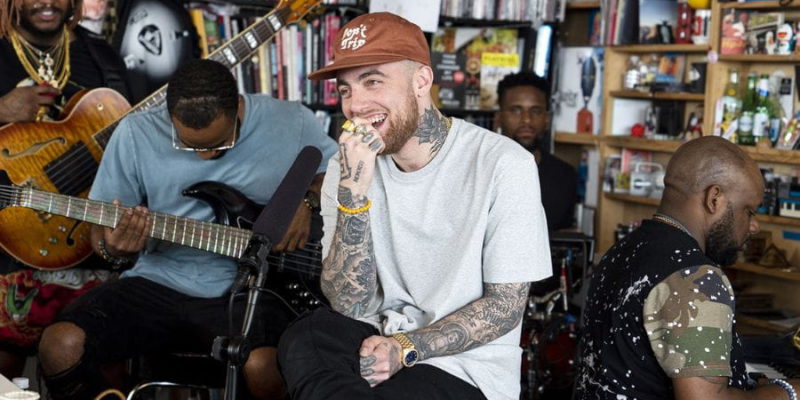 The NPR Tiny Desk concert performances are available as free videos on the NPR Music YouTube channel. They are popular for their cramped location and decorated bookshelf backdrop. With over 100 episodes, these Tiny Desk Concerts became one of the most iconic destinations for discovering some of the best musicians.

The series began in 2009 and has been running continuously ever since. This unusual setting has featured a variety of musical styles, including jazz, R&B, rap, hip-hop, rock, and radio pop.

Tiny Desk Concerts offer the opportunity to see performances in their true context. The invited artist smiles and nods to their bandmate between songs, congratulating them on a job well done. Between songs, guests will talk about the process or inspiration behind some of their works.

Below we have listed some of the best tiny desk concerts that will keep you engaged with heartwarming music performances.

Mac Miller performed one of the best tiny desk concerts just before the month he died. As Mac Miller began the third song of his three-song Tiny Desk set, his raucous tone changed. He was performing songs from his new album, Swimming, in front of an audience for the first time.

He looked like a young man just starting to decipher the code as he wiped his chin and clamped his eyes on “2009.”

Six years ago Anderson .Paak & The Free Nations walked in and created one of the best tiny desk concerts. Your best chance is to describe their music as a jumble of genres in the greatest way possible because a significant portion of it is placed over a soulful hip-hop basis.

The Hi-Tek produced “Come Down,” the opening track of this compilation, gets a hard-rock edge from guitarist Jose Rios and bassist Kelsey Gonzalez. It’s difficult to categorically label this R&B when you hear them play the opening jazz chords of “Heart Don’t Stand A Chance.”

The orange background home recording session of this tiny desk concert certainly caught the eyes of most viewers in just one and a half years. Dua Lipa’s massive appropriation of the pop music scene has been amazing to watch.

When introducing “Love Again,” Dua summarizes the situation by saying, “It’s about attracting good things into your life, when things aren’t quite going your way.”

One of the best tiny desk concerts is Adele singing in an acoustic setup. There is no need to introduce her. The Grammy-winning U.K. pop star showcases her brilliant voice and seemingly effortless charisma. Anyway, it was recorded a decade ago and is still one of the hot favorites.

If you ever doubt the singing ability of T- Pain without auto-tune then we have uttermost condolence for you. We recommend you take a sit and enjoy this tiny desk concert. About using auto-tune T-Pain said in an interview, “People felt like I was using it to sound good. But I was just using it to sound different.”

You can feel Alicia Keys’ aura as soon as she walks into a room; it is one of warmth and compassion. Keys’ songwriting, which is based on reflection and awareness, is essential to this spirit. The mantra that permeates Alicia Keys’ entire personality and each song’s lyrics is that the world needs more love, introspection, and accountability than ever before.

Styles played a number of songs from his most recent solo album, Fine Line, backed by his touring band. He shared insight about the songwriting process in between songs.

From the Nashville day off that inspired “Watermelon Sugar” to the lovesickness he tried to convey in “Adore You,” everything. The bandmates’ friendship was evident, and Styles joined in the fun by spinning in his seat in between verses.

It’s appropriate that Nicki Nicole has the word “bullshit” tattooed on her neck. She has previously stated that the tattoo is a representation of her desire to shed the labels placed on her by her culture and the music business as a young, female R&B musician from Argentina.

If her concert is any indicator, Nicki Nicole is here to stay and is edging further and further away from any preconceived notions of her creativity, or the “bullshit.”

Billie Eilish quickly rose to prominence as one of the largest pop stars in the world, winning several major Grammy Awards. One of the best tiny desk concert videos was recorded at home during the peak time of the pandemic in August 2020.

If you consider his singing, Jacob plays seven instruments, if my calculation is correct. And you should since Jacob has always used voice in his compositions like a Swiss army knife, and almost every band member sings harmony at some point during the performance.

The album of the year according to NPR Music is Heaux Tales by Jazmine Sullivan, and her tiny desk (home) concert is one of the best. Here are four tracks that represent the album’s narrative, which focuses on women’s issues with sex, our bodies, relationships, and more.

Jazmine’s stunning vocal performance, the band’s masterful musicianship, the excellent audio mix, the videography, and the lovely lighting softly shining on Jazmine are what made this concert so exceptional.

Camila Cabello’s iconic “Half of my heart is in Havana” reverberates throughout this musician-packed Miami concert to the beat of her swaying hips and swaying percussionists, with at-home ease that feels unique for the international pop star. One of the best tiny desk concerts that you will probably save to watch again later.

With millions of listeners for more than a decade, Snarky Puppy has been a force for some time. And what’s their special sauce? A gospel, funk, and jazz blend that has been long simmering.

As a result, they have won three grammy awards and gifted us one of the best tiny desk concerts. The amazing part is they created a polyrhythm from the clapping of the audience and opened them to participate in their song.

Phoebe performs three songs from her 2020 album, Punisher, in a trio with Marshall Vore on drums and Harrison Whitford on guitar. They begin with the intrepid-inspiring “Kyoto” and then move into the depressing “Moon Song.” For the trio’s spectacular finale, “I Know the End,” some fresh talent is introduced.

The whole show is really extremely enjoyable to watch, and Phoebe’s voice simply makes you want to cuddle up under your favorite blanket and sip something hot.

There is no need to introduce Ed Sheeran as he is the most popular musician in today’s world. His unique performance forced us to include him in this list of best tiny desk concerts.

World-class musicians joined him for his Tiny Desk (home) concert that enhanced his distinctive vocals and guitar, which often fill a whole stadium. The event was tiny and minimal in keeping with Tiny Desk fashion, but with the choir and brass instruments in the background, it was unlike any other Ed Sheeran performance.

Chika is the main performer of Chika’s Tiny Desk Concert, which is easier than others. Her reliance on her lyrics and flow produces a revitalizing effect.

Chika is a down-to-earth performer who alternates between spitting bars and singing melodies with ease. She demonstrates that an outstanding performance doesn’t require a large production. Putting on a fantastic concert is simple when one has Chika’s talent and self-assurance.

Fans from all around the world have taken notice of the UK artist’s incredibly jazzy performance of his three favorite songs from the album Geography.

Misch has admitted in the past that he isn’t a jazz purist in the traditional sense, but it’s clear that jazz music surrounds him from the way he starts a guitar solo to the way he jams with saxophonist Braxton Cook. Who doesn’t enjoy lots of saxophones and the incredible jamming with Braxton Cook in this set?

What a beautiful soft acoustic guitar melody and sweet voice featured in one of the best tiny desk concerts by Daughter. This London trio band creates melancholy folk with techno undertones. I discovered them from this tiny desk concert and became a fan of their music.

Singer Elena Tonra demonstrates a wonderful talent for handing out weary lyrics that resound and devastate in all three of these sad, heartbreaking songs.

NPR’s tiny desk concert series is a blessing to humanity. They provide an intimate glimpse at an unrivaled diversity of artists throughout their one-of-a-kind, simplistic presentations.

There are many instruments you can learn to play; which one is the ...