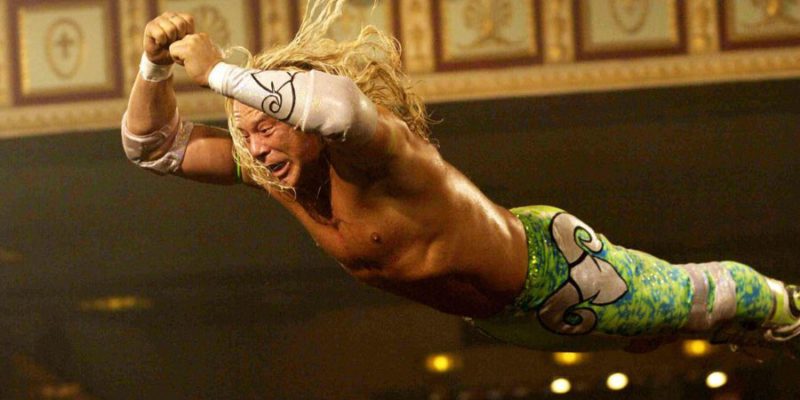 Watching sports is quite entertaining itself, however, the struggles of underdog players or a team are portrayed beautifully in sports movies. These movies can be quite inspirational and emotional.

A common theme found throughout many sports movies is “hope”. Sports movies tell us stories about the strength of working together as a selfless team, as well as about individual strength when all hurdles are removed.

I can say for myself that I do get a strong punch of motivation after watching a good sports movie. So, if you are looking for a similar experience we have compiled a list of our favorite top 10 sports movies.

We have compiled a list of sports movies revolving around various sports like boxing, basketball, etc. All the movies included in this list are critically acclaimed. These movies have various sub-genres like comedies, dramas, family films, action movies, and thrillers.

However, we have excluded sports documentaries and will be purely focusing on movies.

Bend It Like Beckham revolves around two ambitious girls having their minds set on careers in professional soccer. However, their parents are against this decision.

There is not much complication about this film. It has an easily understandable narrative with likable characters. The entire film is sprinkled with heartwarming moments. There are not many good soccer films for some reason but Bend It Like Beckham is a remarkable movie made on that sport.

Overall, the film is very enjoyable and recommended.

Hoosiers (AKA Best Shot) is a film based on a small-town high school basketball team that is trained to become the very best by a coach with a shady past and a local basketball-loving drunk.

The film has a lot of elements that make it an easy watch for non-basketball fans as well. It is visually spectacular, with beautiful cinematography, and the basketball scenes are truly remarkable.

Hoosiers features a great performance by Gene Hackman alongside other cast members including Dennis Hopper. It is a lovely and delightful film to watch.

Foxcatcher is probably the most unique sports film on this list. It has a serious crime-thriller taste to it. The film is based on John Du Pont and his friendship with Olympic gold-medal wrestlers Dave and Mark Schultz who practice at his estate.

Mark admires Du Pont at first, but he gradually discovers the extent of his benefactor’s craziness.

Foxcatcher is a slow burn but will keep your eyes glued to the screen as the mysteries slowly unfold. The film features great performances from Steve Carrell and Mark Ruffalo. Steve Carrel deserves more praise for his role as Du Pont since the character was out of his comfort zone.

This film will stay on your mind for a long time after the credits roll.

It is impossible to discuss sports movies without mentioning “the greatest”, Muhammad Ali. The 2001 biopic focuses on Muhammad Ali’s wins and controversies between 1964 and 1974.

The film is directed by Micheal Mann and Will Smith plays the role of Muhammad Ali. It focuses on multiple important events throughout his life, specifically his stance against the Vietnam War, his conversion to Islam, and his rise to become champion of world heavyweight boxing.

To sum up, this biopic is quite well-made with good performances from all the cast members. It has many inspiring moments and will get you familiar with Muhammad Ali’s greatest achievements.

Bull Durham is a sports-comedy film that revolves around Crash who is an aging minor league baseball player who was called up from another team to help a young pitcher who was having maturity issues. Ann, a baseball groupie with her own take on the game, becomes involved with both of them.

This film is essentially a  rom-com mixed up with sports movie tropes. However, as silly as it sounds the formula actually works quite well. Bull Durham is an excellent sports movie alongside being an excellent comedy movie.

Kevin Cosner has given a hilarious performance alongside his co-stars. All the cast members have great chemistry. This film is a breath of fresh air among baseball movies. It is quite a charming and feel-good movie and you should give it a try.

Moneyball is another baseball movie on this list. It follows Oakland A’s general manager Billy Beane’s successful efforts to put together a baseball team on a strict budget by using a computer-generated analysis to find new players.

As the plot summary suggests, Moneyball is a biographical film. It is a very well-made film. In addition to the great acting, it is also well shot and the countryside is stunning. Bennett Miller does an excellent job directing the film.

The film is easy-to-follow but to fully appreciate it, you must be a fan of baseball. It is probably one of the best basketball movies to date.

The Wrestler revolves around a faded professional wrestler who must retire from the ring due to health complications but his journey for a new life beyond the ring proves to be a demoralizing struggle.

This film gets up close to the professional wrestling scene and shows the hardships and struggles the performers have to go through. The entire film is honest and portrays this sport with realism.

Mickey Rourke convincingly portrayed a lonely and broken wrestler. It is remarkable to see how he transforms himself into the character of  Randy ‘The Ram’ Robinson. The film won’t be as impactful without his performance. All in all, the film has great performances and great direction. Definitely worth checking out.

I, Tonya is a biographical film about competitive ice skater Tonya Harding as she rises through the ranks at the United States Figure Skating Championships. Her future in sports, however, is jeopardized when her ex-husband intervenes.

This film is a beautiful tribute to the legendary ice skater, Tonya Harding. Margot Robbie portrays the role of Tonya. Meanwhile, her abusive mother and ex-husband are portrayed by Allison Janey and Sebastian Stand respectively. All of these actors have done a remarkable job portraying their respective characters.

I, Tonya starts out on a lighter note but things begin to escalate and the film becomes a serious drama. This transition is quite smooth and the film ends on an emotional and satisfying note.

Rocky is a sports drama film. It revolves around a small-time Philadelphia boxer who is given a once-in-a-lifetime opportunity to face the world heavyweight champion in a fight.

I think everyone reading this article has seen this film already. There’s not much to say about it because it is an all-time classic. Sylvester Stalone’s magnificent performance and John Avildsen’s direction made this a must-watch for all the boxing fans.

In addition to the great storyline, the film has an extremely memorable soundtrack. It is one of the finest soundtracks in movies. It perfectly captures whatever is happening on-screen. Rocky also has one of the best-choreographed fights in the history of cinema.

Raging Bull is another sports drama film based around boxing. However, this film is actually a biography. It revolves around Jake LaMotta’s life, in which the violence and temper that propelled him to the top of the boxing world destroyed his life outside of it.

It is regarded as one of Martin Scorsese’s finest films. Furthermore, the dedication of Robert DeNiro to play the character of Jake is very remarkable.

Overall, Raging Bull is a fantastic film in almost every way, but it is not for everyone. It is disturbing and unpleasant just because it is based on a very unpleasant personality. However, if you can digest this type of film then you can go ahead and watch it.

Many sports movies nowadays use a simple formula for the story to unfold. This particular practice is pushing people away from this genre. However, when creators take risks and freshly present the story, the results are mostly breathtaking.

The entries on this list are examples of such sports movies which reinvented the wheel or simply used a non-traditional approach to the genre. These movies are classics and are the go-to choices for every sports movie fan.