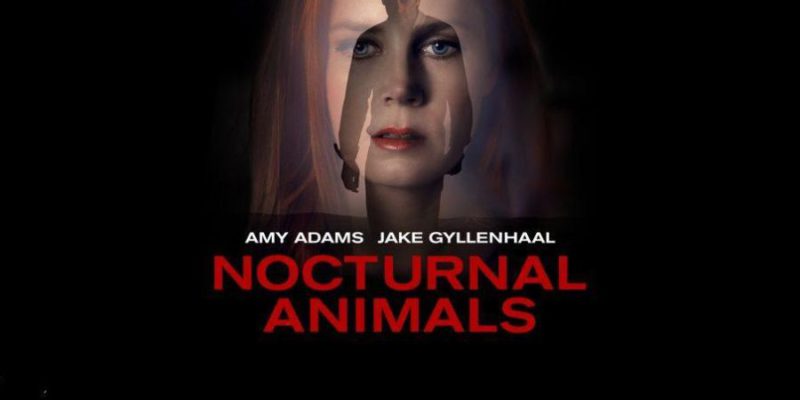 Nocturnal Animals (by Tom Ford) paints a dark picture of suffering and adultery. The movie gets an idea from Austin Wright’s book Tony and Susan. You can see various places in Texas and Los Angeles rather than the New England woods. It still maintains the emotional apocalyptic theme of the book. Susan Morrow, a dissatisfied owner of an art gallery, has played the role of Amy Adams. Her husband Hutton, whom we can see as Armie Hammer, exudes old money cool even though he is subtly going bankrupt. Jake Gyllenhaal portrays two characters: Tony Hastings, the main character in Edward Sheffield’s novel, and Edward Sheffield, Susan’s ex-husband who is also a writer.

The Oscars nominated Michael Shannon for best supporting actor for his portrayal of Bobby Andes.  He is the investigator who aids in uncovering Tony’s family’s murder in Edward’s novel. The Hastings family is terrorized by the sociopathic Ray Marcus, played by an utterly terrifying Aaron Taylor-Johnson.

Nocturnal Animals alternates between Susan’s past and present as she reads the unsettling book that her estranged ex-husband has dedicated to her, revealing a whole dark world between the two. This explains how Nocturnal Animals ends. This “Nocturnal Animals explained” guide will cover all aspects of this amazing movie.

In the opening sequence of Nocturnal Animals, plus-sized ladies dance naked while wearing majorette hats and boots. The performance is really a video that is being projected on gallery walls, while the camera pans back to reveal. The dancers remain there throughout the exhibition on platforms, where they act like dead people.

Even though the exhibit is full of people on opening night for gallery owner Susan Morrow’s most recent exhibition, she is not happy. Even her luxurious Hollywood mansion is unable to comfort her. The following morning, Susan gets a box from Edward Sheffield, her 19-year ex-husband. There is a draft of his newest book, Nocturnal Animals, within. The book differs from what Edward wrote when he and Susan were together, according to a letter that Susan’s butler read loudly.

“Finally,” he pauses, “you gave me the motivation to write honestly. I intended for you to read it first.”

Hutton, Susan’s husband, shows up shortly after. Susan is let out because he skipped her opening. Hutton makes false statements about his knowledge of either Edward or his status as a writer. Susan claims she attempted to contact Edward in the past, but he hung up on her. She seems a little optimistic that Edward’s book may represent reconciliation. Nocturnal Animals explained in this guide cover book ideas and how the movie depicts them.

At their acquaintance Alessia and Carlos’ (Michael Sheen) art-filled home, Susan and Hutton enjoy a soiree. Alessia expresses worry for Susan and suggests Susan just experienced a breakdown during which she revealed some humiliating facts about her marriage. Before dinner, Susan is distant with Alessia, and Hutton departs for New York. Susan hears from Carlos that her opening was outstanding. She disagrees and refers to herself as a “fake.” You will see more in this “Nocturnal Animals explained” guide.

Susan learns at home that Nocturnal Animals is written specifically for her. Her expression shows optimism in that statement. Tony, Laura, and India Hastings go on a road trip to Marfa, Texas, in Edward’s book. While India is a moody teen attached to her phone, Tony and Laura are deeply in love. This is the important detail of the “Nocturnal Animals explained” guide.

They had to leave the road by three vicious thugs named Ray, Turk, and Lou one late at night. Ray and his associates abuse the Hastings family verbally and then physically during a tense confrontation, and Ray and Turk then abduct Laura and India in Tony’s car. Tony is helpless to stop his family from facing the painful situation as they scream.

The thickness of the plot – Nocturnal Animals

Tony Hastings is left at the end of a dusty road after Lou compels him to drive Ray’s car into the middle of nowhere. Because it is completely dark, Lou and Ray are unable to find Tony when they return for him and must afterward leave. Tony eventually finds a house as he strolls down the highway the next morning. Detective Bobby Andes assists him in retracing his steps to the location where he was left for dead after police pick him up. On a luxurious velvet couch, they discover his wife and daughter’s bodies—without clothes and their bodies circling each other.

Susan calls India Hastings in a panic because she resembles her own redheaded daughter Samantha. Samantha is alright, but Susan is blind to the fact that she is nude in bed, exactly like India was in the novel.

Susan remembers running into Edward in New York in a flashback after hanging up with Samantha. Susan is already pursuing her degree in art management at Columbia University, and Edward is attempting to enroll in the writing program there. She says to him, “I’m too cynical to be an artist. They then talk about how they used to have crushes on one another back in Texas. The Hastings family in Edward’s novel comes after the community where Edward and Susan used to live, and the audience is aware of what’s going on.

Warnings & alertness signs from the mother

Laura and India are finally present. Detective Andes can locate the trailer in the area where everything took place.

An appalled Susan remembers having supper with her affluent mother, Anne (Laura Linney). Susan’s proposed marriage to Edward is not something Anne supports since she thinks he won’t ever be able to financially support her. “You’ll regret it, Susan’s mother told her, so don’t do it. In a few years, you’ll find the qualities you adore in him to be repulsive.” Susan protests at the time, but since we know Susan and Edward end up divorcing, we can look back and see her mother was correct.

Susan emails Edward in the present and describes the book as “devastating” and “very moving.” She wants to go out for drinks on Tuesday. She begins the email with, “Much to say,” and ends it with, “Love, Susan.”

She keeps returning to the book or Edward in her thoughts. After that, she reenacts an exchange in which Edward says that writing is the closest thing to perpetuity. Nocturnal Animals is obviously a superb masterpiece having this sort of effect on Susan. She interprets his decision to tell her the tale first as a positive omen. But she will quickly realize how mistaken she is.

Tony receives images of Turk from Detective Andes, but a devastated Tony is unable to identify him. After a year, Tony, who is now clean-shaven, learns that the Andes have a lead: The police arrested Lou, and someone killed the Turk in a heist. Tony recognizes Lou as the assailant. Lou claims he didn’t do it, yet he is nonetheless accused of murder.

Susan is busy in thoughts about Edward at her gallery. She informs her assistant about the book, its dedication to her, and the fact that Edward used to refer to her as a “nocturnal animal”. This is because she’s never been able to go to sleep. Susan claims that she had a strong affection for Edward and had hurt him in an unacceptable way.

Later, Susan is entranced by a typographic work that has the word “REVENGE” on the wall of her gallery. She doesn’t recall purchasing it. Susan is about to realize the extent of the suffering she caused Edward and the lengths to which he has gone to make amends. Right up until her board meeting, you nearly feel terrible for her. She treats her coworkers poorly and dismissively, especially the ones dealing with botched plastic surgery. Any pity we may have had for Susan disappears.

Detective Andes and Tony Hastings pursue Ray for “informal interrogation” in Nocturnal Animals. A calculating psychopath, Ray. We nearly start to mistrust Tony’s memories because of his insistence that he did nothing wrong and his convincing portrayal of innocence, but occasionally Ray’s eyes reveal the reality. Tony is curious about the final moments of his family. Ray wants to tell him but holds back.

As the tension in the book builds, Susan experiences another flashback, this time to a violent argument she had with Edward after she didn’t like his debut book. She’s incredibly cruel, telling him to write about something other than himself and making fun of the fact that he wants to work at a bookshop while he writes books. Edward responds, “You sound like your mother,” in anguish.

Susan agrees with him for the first time. Susan also recalls making out with Hutton not long after.

Tony learns that Andes has lung cancer and is dying back in the book. They learn that Ray Marcus was fired due to a lack of proof due to some legal technicalities. Andes and Tony make the decision to go rogue and go for Ray on their own.

Susan remembers her traumatic separation from Edward. Insisting that “When you love someone you work it out… You might never get it back,” he urges her to remain.

Ray and Lou are kidnapped by Andes and Tony in Edward’s novel. The criminal couple flees after engaging in multiple violent altercations. Andes brutally murders Lou. A dead bird crashes through Susan’s glass window as she reads the gunshot.

Susan remembers having an abortion in the past. She visits the doctor with Hutton even though the pregnancy is the consequence of her rendezvous with Edward. In the car, while he consoles her, Susan notices a distressed Edward observing them.

In the novel, Tony Hastings is inconsolable about Lou’s passing. “I’m pleased you killed him! I’m relieved he’s gone “He yells, but soon sobs in sorrow for his daughter and wife. To find Ray, Andes and Tony split up. In the trailer where he murdered his loves Laura and India, Tony discovers him. Ray finally reveals his repulsive actions and total lack of regret after much teasing. Ray pulls a fire poker out from beneath a pillow as Tony decides to shoot him.

Justice as punishment, & art as retribution

In Edward’s book, Tony Hastings can only receive justice through vigilante retaliation. However, vigilante justice is usually crueler and depressing than one expects, just like it is in real life. This reality is well illustrated in Edward’s story and his actual act of retaliation.

In the universe of the film, Edward seeks retribution by producing a stunning and unsettling work of art to convince the woman who didn’t understand his tremendous artistic potential. Due to their tragic, dismal endings, this retribution and the revenge in the story run interesting parallels to one another. Watching Susan look at the “REVENGE” artwork as she is unable to understand why it is frightening her so much is one of the most heartbreaking scenes in the entire movie.

It takes getting stood up in person for Bella to completely understand the depths of Edward’s rage since she is so mired in her narcissism and her recollections of how favorably he previously thought of her.

Edward’s retaliation is totally thorough and heartbreaking, just like Tony’s was in the book.