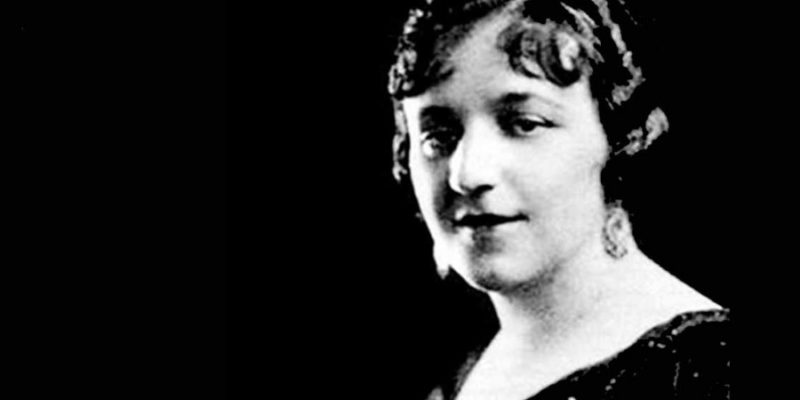 Maria Grever (1894–1951), the first Mexican woman to become a successful composer, was a pioneer in the field of twentieth-century popular music.

Although Grever may not be as well-known as some of her contemporaries, her body of work is extensive, and her personal story of perseverance and resourcefulness deserves to be recognized.

Mark Pedelty writes in his book Musical Ritual in Mexico City, “Maria Grever is among a handful of post-revolutionary boleristas who deserve top billing.”

Despite never achieving stardom, Grever had a successful career in both Mexico and the United States.”

The fact that she wrote music for both the Mexican and American markets demonstrates her broad appeal and business acumen.

Beginning in the 1920s, her romantic melodies and ballads, such as “Jurame” and “What a Difference a Day Makes,” became very famous among audiences in Spain, South America, Mexico, and the United States.

Her mother and father were respectively Mexican and Spanish, and she moved to Seville, Spain, as a child to study English, French, and music. Maria Grever’s musical talent was evident from the start.

Grever studied piano, violin, and voice, albeit one biography claiming that she only learned to read music in her later years. In fact, the majority of her songs were written in a single key.

Maria Grever was said to be endowed with the gift of perfect pitch. Grever performed opera in Madrid early in her career, according to a 1919 New York Times review of one of her first New York City concerts.

According to The New York Times, she wrote a holiday carol for her school when she was four years old. That was an accomplishment that prompted her father to hire composers Claude Debussy and Franz Lehár to tutor her.

Maria Grever absolutely loved performing, as she told The Brooklyn Daily Eagle in 1947: “I was always play-acting. I used to wrap myself up in my mother’s veils and recite things. They were always tragedies. I was an orphan left lonely by the sea.”

Before returning to Mexico, Maria Grever and her family traveled throughout Europe.

Her sister later married an American, whose best man was oil company executive Leo A. Grever. Four days after her sister’s wedding, Maria and Grever got married.

She frequently composed both the melodies and lyrics for her pieces, which she then performed live in concerts.

Throughout her career, which peaked in the 1930s and 1940s, she composed film scores and wrote lyrics for Broadway shows, as well as organizing concerts that combined theater, music, dance, and song. She was also a voice instructor.

Grever’s greatest legacy, however, is her songs.

The lyrics, which are mostly based on the folk rhythms and styles of Latin American music, principally Mexican or Spanish tangos. The compositions are mostly romantic, full of feeling, and quite easy to remember.

Her message always seems to be straightforward.

Maria Grever wrote over 800 songs, the majority of which were boleros. Her popularity spanned Latin America, Europe, and the United States.

She was said to have perfect pitch and to have written the majority of her songs in one key.

At the age of four, Maria Grever composed her first piece of music, a Christmas carol. She wrote her first song, “A Una Ola” (To a Wave), when she was 18 years old, and it sold three million copies. She began her career as a film composer for Paramount Pictures and 20th Century Fox in 1920. When she first joined ASCAP in 1935, her main musical collaborators included Stanley Adams and Irving Caesar.

Maria Grever once stated, “I had to leave my country, and now in New York I am interested in Jazz and Modern Rhythms, but above all, in Mexican Music, which I long to present to the American people. I am afraid they don’t know much about it. It is music worth spreading; there is such a cultural richness in Mexican Music (its Hispanic and indigenous origins and how they mix) where melody and rhythm merge. It is my wish and yearning to present the native rhythms and tunes (of Mexico) from a real perspective, but with the necessary flexibility to appeal to the universal audience”.

After marrying and moving to Xalapa at the age of 22, she began to write more and had three children, the youngest of whom died six months later.

The Mexican artist found solace in music, and her grief inspired her to write the song “Te quiero, dijiste”.

Tenor Alfonso Ortiz Tirado’s “Te quiero, dijiste” became his signature song on all of his recordings and Latin-American tours.

The song became well-known around the world and was frequently requested at concerts.

“Te quiero, dijiste” is a lovely, sincere song . It starts with

Translation of which is

Taking my hands into your hands

and I felt in my chest, a strong pulse,

of a fevered kiss.”

Maria Grever’s life was filled with personal adversity, and she told her story through song lyrics.

One of these fervent texts became the inspiration for Grever’s hugely successful hit, “Júrame.”

It is rumored that it was inspired by her long separation from her husband.

“Júrame” marked the pinnacle of her career.

Grever had difficulty getting her work published prior to the success of this song due to the competitive nature of the business.

“Júrame” had a great impact on the Latin American population and was extremely popular among them. The male dominated media of those days could not imagine that it was the work of a woman and still credited José Mojica for making it famous. It is traditionally sung by tenors but can also be sung by sopranos.

yo te juro que yo mismo no comprendo,

“Everyone says that it is a lie that I love you

Because they have never seen me in love.

I swear to you that I also do not understand

the reason I am fascinated with your gaze.”

When it was translated into English as “What a Difference a Day Makes,” it was recorded by Frank Sinatra and Bing Crosby, among others. “Cuando vuelva a tu lado” was quite popular in Latin America, but it also had great success in the United States.

Dinah Washington won a Grammy Award for her rendition of the song in 1959, and she was inducted into the Grammy Hall of Fame in 1998.

It seems fitting that a woman of color would be recognized for performing a piece by Maria Grever, who was such a trailblazer for minority women.

What a Difference a Day Makes is a version by composer Stanley Adams. Versions by Luis Miguel, Gloria Estefan, and Los Panchos have become popular in Spanish. At the start, it goes –

that you jokingly denied me,

It escaped from your lips without wanting to.

And scared for it I seek shelter

in the immense bitterness of my being.”

This is a very touching song for the ones that are lonely. The song starts with a straightforward address to the soul in waiting. The first few lines are –

Which can loosely be translated to:

Without anyone understanding your suffering,

The piece, like “Júrame,” has an intimate text and many grand moments. This romantic song starts as-

No puedo comprender que se olvide jamás” translation of which is-

“That which is for others is

a kiss nothing more

For me, it is a life of illusion.

I cannot comprehend that I will never forget”.

Maria Grever’s lighthearted song, “Tipitn,” was published and recorded by a variety of artists in 1938.

It was a commercial success and peaked at number one on the Hit Parade.

Grever wrote the song while ill, and after telling her doctor she was “tippin,” she fainted.

“Ti-pi means like the pitter-patter of a guitar strum.”

I created the word.

“The world is so upset and I want to send happy messages through my music.”

Maria Grever was aware that her song was a hit, but publishers thought it was ridiculous and rejected the piece.

Grever self-published the song and attributed its success to her ability to connect with the “vibrations of the audience.” a few lines from this famous song is –

pero me he enredado en ellos

y no me puedo escapar.

Maria Grever’s “Volveré” is a bolero.

The text is written from the perspective of a woman, and it employs symbolic imagery to depict the interaction between man and woman.

The woman in “Volveré” is free and uncontainable (the butterfly or “mariposa,” the ocean waves or “olas”); the man is fixed and steady (the beach or “playa”).

The woman with a strong will also decides when she will return to the man. The song at the start goes as-

“I know that because of my absence

You have cried a lot.

And I know that you have thought

Finally, I would forget you.

But you don’t understand

That we are so united,

That the day you think of me less,

I will be at your side.”

During the 1940s, Maria Grever spent her time writing new songs, composing for film scores, and publishing her music.

Her popularity grew as more performers performed her works live.

The song’s success, like that of other Grever hits, was due to its distinct expressive color, sophisticated harmonization, and intimate, evocative text.

“A night on the beach, in the moonlight has never happened

Listening to love songs until sunrise.

I also wait for you.

I wait for you, and only you.”

Maria Grever’s “Despedida” is from her album Six Songs.

Grever’s own Portilla Music Corporation in New York released the collection of songs in 1946.

Many of these songs used themes and dance rhythms reminiscent of Spanish motives and dances such as habanera, bolero, waltz, and tango.

Although these pieces were also orchestrated, the scores are no longer available because Portilla Music no longer exists.

“Despedida” is the album’s most well-known song.

The beginning of the song is as follows-

“A sad smile your lip drew

An indiscrete tear fell from my eyes.

Your hand in mine,

Dinah Washington then recorded “What A Difference A Day Makes” (originally “Cuando vuelva a tu lado”) in 1959, which became her signature song.

Google celebrated Maria Grever on February 11, 2021; the very day on which her widely acclaimed song “Ti-Pi-Tin” was released in 1938. A waltz serenading the loved ones.

Grever is depicted in a colorful sketch, wearing a green blouse and gold accessories, over a curved music staff with musical notes.

“Google” is written in a vintage green font.

“Thanks for all the music Maria Grever; it continues to strike a chord with listeners around the world today!” noted Google.

End of an Era

Grever suffered a stroke in April 1948, paralyzing half of her body.

She struggled with health issues, but she continued to compose and perform until her death in 1951.

Her life and contributions to music, women’s advancement, and Latin American advancement have been memorialized by institutions and organizations such as The Union of Women of the Americas (La Unión de Mujeres de las Américas), The Cultural Institute of León (Instituto Cultural de León), and she was awarded the Medal of Civil Merit from Mexico City for her work in music.

Maria Grever was tenacious, multi-talented, and creative. She was both a wife and a mother, as well as a talented artist. Grever endured personal adversity, heartbreak, and loss but never gave up, remaining cheerful throughout.