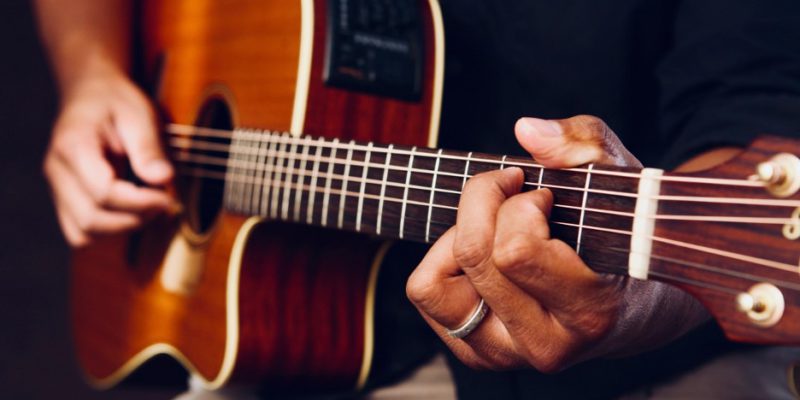 Learning to play guitar chords is quite intimidating for beginners. You will need a lot of finger strength & flexibility to grab several strings in different fret positions at a time. The only way to get used to playing guitar chords is to practice in regular intervals.

There are easy guitar chords that you can learn within a few days of practice. In this article, you will find an overview of guitar chords & how to play some basic guitar chords. Using those chords you can play thousands of songs and have fun.

What Is A Guitar Chord?

A guitar chord is a set of music notes played at a time by strumming or plucking in an Arpeggio sequence. It is the foundation to support every song and melody. Most guitar chords are built using three notes called triads.

The root note (lowest pitch) is the key to any chord construction. The chord quality (major, minor, diminish, augmented) determines the rest of the notes in a chord. You can create a chord using dozens of notes but the outcome would most likely be a vast disoriented resonance unfit for anything but experimental music.

How To Read The Chord Diagram

Reading a chord diagram is a piece of cake. Follow the below instructions and learn how to read any chord diagram.

You can learn to play any guitar chord using a chord diagram. For beginner guitar players, I would recommend the following eight guitar chords:

The list is in the order of easy to difficult levels. You will find Em as the easiest chord on the list. All of these chords play within the first three frets. These chords are also called open guitar chords. You need to play one or multiple notes on the open string.

1. How To Play The E Minor Chord

2. How To Play The E Major Chord

Same as the Em chord. Instead of leaving the 3rd string open place your index finger on the first fret.

3. How To Play The A Minor Chord

4. How To Play The A Major Chord

Same as the Am chord. Instead of grabbing 2nd string of the first fret, use your pinky to grab the 2nd fret of the same string.

5. How To Play The C Major Chord

6. How To Play The D Major Chord

7. How To Play The D Minor Chord

8. How To Play The G Major Chord

How To Play Guitar Chords Properly

In the beginning, you may feel pain, trying to hold any guitar chord. It’s better if you make short practice sessions and practice several times every day. Whenever you feel pain, take some moments to rest and start practicing over again. Within a few days, you will gain finger strength and flexibility.

When we practice a move over and over again, our brain stores the information as muscle memory and processes it quickly. Once you build your muscle memory for holding a guitar chord you will not feel pain anymore to play the chord.

That’s it for how to play guitar chords. You can also focus on major & minor seven chords (E7, Em7, A7, Am7, D7, Dm7). Those are also very easy to grab & play. But whatever chord you play, remember its name.

Netflix’s Money Heist [Season 5] | Everything You Need To Know

The Handmaid’s Tale [Season 5] | Is It The Last Season?