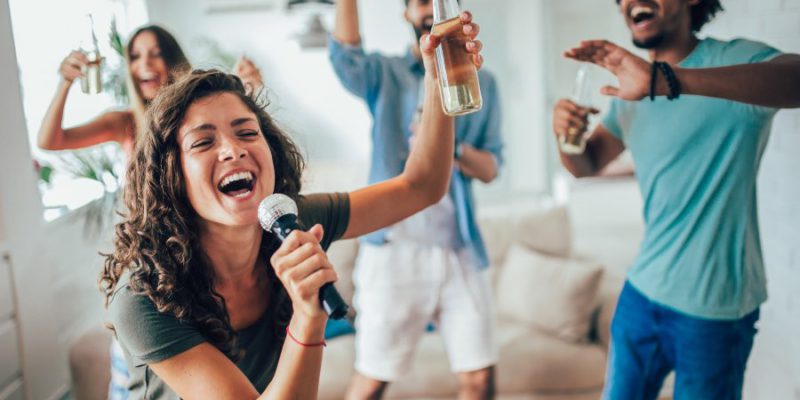 This article introduces you to the best country karaoke songs that your audience would love to hear from you. You may have a thousand songs in your mind. But finding the right song for a karaoke performance may often be confusing. You don’t want to bore people with a song that no one knows or relates to.

That is why the song selection is as important as being a good vocalist for a better Karaoke performance. Country songs are widely popular around the world. Almost everyone knows popular country songs and people love them. So, this genre is definitely a great choice for karaoke.

Johnny Cash’s “I walk the line”

The song “I walk the line”, released in 1956, has a very cheerful singing style. It was cash’s first billboard hit. The song was written backstage in just one night. According to Cash, “I walk the line” was his ‘pledge of devotion to his newly married wife.

Country roads take me home, is among the top hits of John Denver. There is a high possibility that if you start signing it, the audience will join and sing with you too.

The song has something alike within that forces everyone to fall in love with it. Maybe because deep down we all love our home, no matter where we are from. ‘Take me home” is one of John Denver’s best country Karaoke songs. A song that is suitable for almost all environments.

The Chicks’ “Cowboy, Take Me Away”

Wanna try something upbeat? Try out this song. “Cowboy, Take Me Away” released in 1999 in the album Fly. The Grammy-winning triad stole country lovers’ hearts with this simple and sincere song. Just, take a deep breath of courage and give your best at the stage. You can point your finger and encourage him to come to join you if there is a cowboy you like.

Who hasn’t heard “Love story” by Tailor Sift? Having a heartbreak nowadays? Or maybe you getting flashbacks in between a Karaoke session? Maybe the person you like is present at the gathering.

No matter if you have a purpose or not this song is an all-time hit. Perform the song with all your feeling and emotion. Your love story may or may not be successful, but Tailor’s love story is one of her biggest hits.

Carrie Underwood’s “Before He Cheats”

Got a powerful voice? Then this song can be good to go for you. The song was among the best sellers in this genre, released in 2006.

Dolly Parton’s “I will love you”

“I will love you” released in 1974. The song was a quick hit right after its release. Many suggested it as the best country Karaoke song. The song was written and sung by the American singer-songwriter, Dolly Parton as a farewell to her business partner.

Crazy is a song that popularized by Patsy Cline. Written by Willie Nelson. The song got released in 1961 and became the most played song in jukeboxes in the US.

Taylor Swift”s “Back to December”

This song, written and recorded by Tailor swift in 2010 for her third album, Speak Now. This country-pop is surely one of Taylor Swift’s best. According to her, “Back to December” was her first time apologizing to someone in a song.

We don’t know what her real story was, but we can say, if you can give a good show, your audience will love this song.

John Denver has added many country hits throughout his music career. “Leaving On A Jet Plane” country song released in 1966. It’s a song with hope and a beautiful story. Your audience will love to hear it from you.

“Friends in Low Places” released in 1990 with the album, ‘No Fences’. The song was at the top of ‘Hot Country Songs’ for four weeks. It got awards from the Academy of Country Music and the Country Music Association.

LeAnn Rimes’ “How Do I Live”

“How Do I Live” is a song about unconditional love, saying how hard life becomes without the person you love. The song was released in 1997. It was also performed by Trisha Yearwood which has been featured in the film, ‘Con Air’.

Not among the easiest songs around but also a good pick for a karaoke performance.

Shania Twain’s “That Don’t Impress Me Much”

That don’t impress me much is a song that gained worldwide popularity. It was released in 1998 in the album ‘Come On Over”. The song speaks about how generally impressive things do not impress her. But the funny thing is, she never cleared what actually impress her.

Jokes apart, it’s a nice song to select for staging in a Karaoke gathering.

There is no rule that all the Karaoke songs will be happy and cheerful. Sometimes sad songs should also be performed. “Hurt” is a song like that. It was released in 1995. But, Johnny Cash covered it in 2002 for commercial and critical acclaim.

“Amazed” is one of the best country karaoke songs you will find on this list. The song was released by Lonestar as their 3rd song of the album named Lonely Grill. This 1999 released song stayed at the top of the Billboard country chart for eight weeks. So, this romantic song can be good to go for.

This song by the American country music singer Faith Hill was released in 1998. The song is on the cheerful and romantic side. “This kiss” is a crossover hit reaching no.1 on the American and Canadian country charts.

“Jolene” was released and recorded in 1973 by the American music artist Dolly part. It’s one the best of Dolly Parton that you may also like to perform. The tune is pretty much popular so you should get some people in the audience singing with you.

Hey Hunger Game Fans! You may love this one. Safe and sound 9is the theme song for The Hunger Games 2012. However, the song was released in December 2011. The vocalist Taylor Swift does not need any further introduction.

“It’s Five O’clock Somewhere” spent eight non-consecutive weeks at the top of the Billboard Hot Country Songs chart in summer 2003. Try it out. Maybe it will be among the best country karaoke songs you have ever performed.

“Chicken fried” is not a dish you can start eating but it’s a popular song by Zac Brown Band released in 2008. Though different versions of this song were released in 2004 and 2006. The 2008 version was featured in the film Witness Protection.

Undoubtedly Lady Antebellum”s “Need You Now” is among the best country karaoke songs. The was co-written with Josh Kear. It’s the lead-off single and title track of the album, Need You Now released in 2010. It was at the top of the Billboard Hot Country Songs chart for five weeks. Definitely, a great choice if you picked this one.

“Body Like a Back Road” is Hunt’s most successful song till today. It spent 20 weeks at the top of the Billboard hot country songs chart. So, surely this 2017 release is a popular one. Your audience should join and sing with you as a lot of people know this song.

The Band Perry’s  “If I Die Young”

“If I Die Young” is a song released in 2010 as the second single from Band Perry’s self-titled debut album. It’s a song about the sadness of dying young as she never got to experience love and how her loved ones may miss her.

It’s not something that will make the gathering cry, but definitely a classic choice for a Karaoke performance.

Luke Comb wrote this song with Wyatt Durrettle and Robert Williford as a bonus track to his debut album This One’s For You, released in 2017.

The song is about how the crazy things about the girl you love are beautiful to you. According to some online sources, Luke wrote this song about his wife even before they started dating.

Do you have someone like that who may be listening to you when singing this song?

“Stay” is an American country song released in 2007. It is the fourth single front of the album, Enjoy The Ride. It’s a sad song about a mistress being cheated by the man she loves and how hard it is to deal with the pain.

‘I hope you dance’ is the title track of Womack’s 2000 album, released in March 2000. It is recognized as their signature song. According to Womack, the song makes him think about his daughters but it may be different things to different people.

Do you like rap songs with a country vibe? Then you might like this one. “Old Town Road” is a country rap released in 2018. Lil Nas X released the remix version with Billy Ray Cyrus.

Add this song to your karaoke singing list to do something different.

“Ring of Fire” is among the oldest songs on this list, released in 1963. It was one of the biggest hits of cash’s career. Give this song a try, if you haven’t heard it yet.

George Strait “All My Exes Live In Texas”

“All My Exes Live In Texas” is a nice song in the country genre. Can be a good choice for karaoke night. Especially, if you are in Texas or if you also have exes from Texas. The song was released in 1987 in the album, Ocean Front Property.

The song is from the perspective of a rodeo cowboy who faces many difficulties, he is not rich either but, he is free having no regret about his lifestyle. Amarillo by Morning was released in 1973. However, the George Strait version was released in 1983.

We would like to end our list of 30 best country karaoke songs with “Speechless” by Dan + Shay. It reached the top of the Billboard Hot Country Songs and Country Airplay charts. This romantic country song was released in 2018. A great pick for the karaoke night showdown.

A good selection of songs can make your Karaoke night the most memorable one. Consider the kind of gathering you are singing with when choosing a song. You don’t have to be an expert at singing for a karaoke performance. A few mistakes are acceptable. However, you have to sing from your heart.

Check also: 15 Of The Best Guitar Hero Songs Of All Time