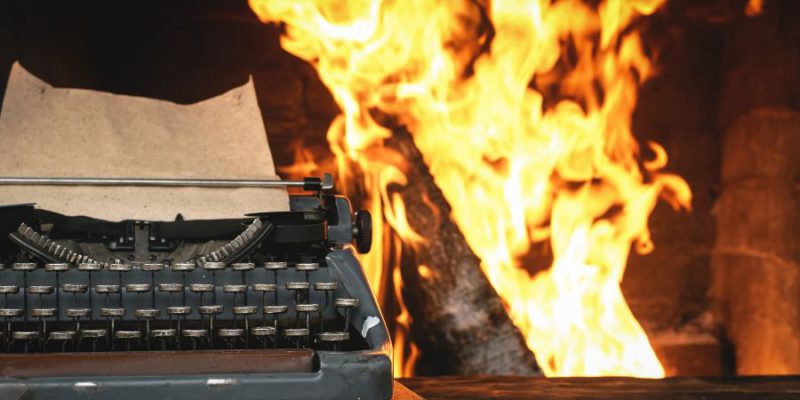 Making movies about writers seems quite a tedious task since the subject itself doesn’t offer much excitement. However, there have been some genius filmmakers who have managed to capture the feeling and procedures of a writer in an exciting way.

The movies about writers offer us a detailed look at their lives. It showcases the aspects of their life that are often ignored. Moreover, these movies can be quite inspirational as they teach us how to express our feelings properly.

Not all the movies in this list certainly follow real writers and their process of creating a literary masterpiece. However, we have handpicked those movies about writers which portray the process of writing itself or a tale from their life in a cinematic way.

The best way to kick off our list of movies about writers is by mentioning the most influential female writer, Jane Austen. Becoming Jane is a biographical depiction of a young Jane Austen before she became famous, and her emotional connection with a young Irishman.

Anne Hathaway is the perfect casting choice for the role of Jane Austen. Her performance is stunning. Moreover, the film is visually pleasing and the production design is insane. Overall, it is an enjoyable love story and biography.

There have been many movies about writers made outside of Hollywood. Certified Copy is one of those films. This French film is about a middle-aged British writer visiting Tuscany to promote his current novel. He encounters a French woman who leads him to a village where they discuss various aspects of life.

Unlike some other foreign artsy movies, Certified Copy is very enjoyable and easy to follow. Moreover, the film deals with the concept of male-female relationships in a new light.

Sometimes real-life stories are way more inspirational than fiction. Such is the story of French journalist Jean Bauby. When a sudden stroke left his entire body paralyzed except his left eye. However, this didn’t stop him from keeping his commitment to writing a book.

Out of all the movies about writers, The Diving Bell and the Butterfly is the most inspirational. It showcases the importance of having an imagination and optimism. In short, the entire film is very beautiful and powerful.

Reprise is a Norwegian film. It is a compelling drama about two aspiring writers that captures all of the ambitions, dreams, and hardships that come with stepping into the world of writing.

This movie is quite thought-provoking and heart-touching. It has very strong storytelling. Furthermore, this film is actually Joachim Trier’s (director of Thelma) directorial debut and he has done an incredible job.

Not all movies about writers are supposed to be serious and dramatic. Adult World is a comedy film about Amy, a naive college graduate who feels she dreams of becoming a renowned poet. She accepts a job in a shop grudgingly while pursuing a mentorship with unsociable writer Rat Billings.

As per comedy standards, this film is one of a kind. It features intelligent writing and a brilliant cast. The film is a delight to watch. However, it is a little too long for a comedy but you’ll never feel bored.

Writers often have a secret that is publicized long after their death. Henry & June is about a young woman writer who is fascinated with an older, famous writer and his sensual wife June. The film is based on the diary of a famous writer, Anaïs Nin.

This film is definitely not for everyone. It is difficult to watch for average film-goers, however, once you get fully invested. There’s no going back.

It is tough for a writer to realize that his work is no longer valuable and people don’t like it. Can You Ever Forgive Me? is about autobiographer Lea Israel. When her books don’t sell anymore she uses her talents to forge and sell items from famous writers.

This is probably the best performance given by Melissa McCarthy. She shines as the writer-turned-forger Lea Israel. This film is a delight to watch. Although the plot is intense, it is not excessively sad and is also quite emotional and sympathetic.

Some movies about writers can take you down a path of the writer’s nostalgia. In this film, Dorothy Parker recalls the glory days of the Algonquin Round Table, a group of pals whose razor-sharp wit, like hers, was fueled by booze and flirted with melancholy.

You need multiple rewatches of this film to fully understand and appreciate it. Overall this is a classy film with beautiful cinematography and amazing acting.

Sometimes writers become more famous for their ideas than their writings. Marquis de Sade is the focus of this film. He battles a tyrannically prudish doctor in a battle of wills while he’s locked up in an asylum.

Sure, the film is not a hundred percent historically accurate. However, it has a certain charm to it. Especially the way it brought the controversial writer, de Sade to the big screen. Quills is the kind of film that sticks with you and stays in your head for quite some time.

Who needs papers for writing when you have your silky smooth skin. The Pillow Books revolves around a girl who is obsessed and aroused by the idea of body-writing and poetry.

Writers can often get obsessed with an idea and go to any extent to fulfill it. Truman Capote discovers the homicide of a family in 1959 and chooses to write a book about it. Capote contacts one of the murders, Perry Smith, who is on death row to research for his book.

Philip Hoffman portrays the character of Capote and he is so brilliant. His performance is the backbone of this film. In addition to Hoffman’s performance, the film has smart writing and brilliant direction.

In the sequel to Before Sunrise, we see Jesse and Celine cross paths again during the French leg of Jesse’s book tour, nine years after they originally met.

Before Sunset manages to capture the same emotional feeling as its predecessor. There are many emotional and dramatic moments and they’re handled perfectly. In short, it is the perfect romance movie.

A creativity block can be a writer’s worst nightmare. It can lead to poverty and depression. However, lucky for Shakespeare when he meets his ideal woman, he is inspired to write one of his most famous plays.

Unlike some other “biographies” on this list, this one is quite entertaining and easy to follow. It is witty, romantic and there is a perfect balance between the two. Moreover, the film has an insane cast. If you‘re a fan of Shakespeare, you should definitely watch it.

Wonder Boys revolves around an English professor who has to deal with his wife’s departure, his editor’s arrival after a seven-year wait for his book, and the numerous challenges that his friends and associates throw his way.

This movie also portrays the horrors of creativity block. However, the storyline and theme are quite inspirational. The highlight of the film is definitely the acting by Micheal Douglas. He makes you fall in love with an ordinary English professor.

Some real-life characters create a massive impact on the world. Fred Rogers is such a personality. This film revolves around Lloyd Vogel, a cynical journalist, who meets Fred Rogers while researching an article about him. However, the two form an unexpected friendship.

This film will particularly be important and nostalgic to people who grew up watching Mr. Rogers on TV. The gradual transition of Vogel’s character is simply beautiful. The pacing is very moderate, sure it’s not the fastest but it’s not the slowest either. It is highly recommended.

Naked Lunch deals with the process of writing under the influence of recreational drugs. It revolves around an exterminator who mistakenly kills his wife after becoming addicted to a drug he uses to kill bugs.’

This film is very surrealistic and interesting to watch. This is not a film to see solely for the plot. This is a series of unsettling imagery that you should experience. It’s odd in its purest form. This film actually reminds me of Fear and Loathing in Las Vegas.

This film follows Janet Frame, a bright child who was misdiagnosed with schizophrenia as a teenager. As her books are published to critical acclaim,  the film follows Janet’s journey across the world and her life in Europe.

This movie about a writer is unlike any other film on this list. It is essentially a biopic done correctly. An Angel at the Table showcases how storytelling and the creative process as a whole can help people heal.

To conclude, this film is emotionally very strong and features some amazing performances by all the cast members. It is a tear-jerker.

Various movies about writers have dealt with the problem of writer’s block but Barton Fink takes it to the next level. It revolves around a well-known New York playwright who is lured to California to write for the movies, only to find the horrors of Hollywood.

We have talked about this film in detail in our list of movies about loneliness. It is made by the Coen brothers and I think it is their most underrated film. This film will hit right at home with anyone who likes to write. It is a very unique and engaging movie.

Midnight in Paris is a romantic comedy about a screenwriter who goes to Paris with his fiance’s parents for a family vacation. Every day at midnight, however, he magically travels back to the 1920s.

This film is plain gorgeous. Midnight in Paris is a highly well-made film, with its astounding locations/scenery, brilliant colors, and superb cinematography. The acting is top-notch as well. Moreover, the film takes you on a rollercoaster ride of emotions.

The process of adapting fictional work into a movie can be quite difficult. A lovelorn screenwriter (Charlie Kauffman) becomes desperate as he tries and fails to adapt ‘The Orchid Thief’ by Susan Orlean for the screen.

The film is based on Charlie Kauffman’s own life experiences. Nicholas Cage has done a brilliant job in this film. It is one of my favorite movies featuring him. In addition to the acting, the film has a gripping narrative.

Meryl Streep, Chris Cooper, Tilda Swinton, and Cary Seymour all provide outstanding performances as well. In short, this film comes closest to depicting how weird, time-consuming, and perilous an undertaking it truly is.

These movies may help you understand how intriguing the process of writing truly is. So this was our list of movies about writers, we hope they inspire you to begin your own journey as a writer.